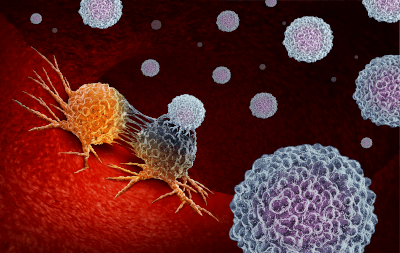 October 1st, 2018. In an unassuming lecture theatre at the Karolinska Institute in Stockholm, Sweden, Professor Klas Kärre, a member of the Nobel Committee for Physiology or Medicine, takes to the stage.

“Cancer represents a major medical challenge, in the global perspective,” he says. “Let us look at our immune system. It protects us from infections, it comprises a great diversity of cells and molecules with different functions, and they can be found all over the body. The fundamental property of the system is its ability to discriminate between self and ‘non-self’, so that viruses and bacteria can be attacked.”

In these opening lines, Kärre laid the groundwork for the announcement to follow. Namely, the announcement of 2018 Nobel Prize in Physiology or Medicine, jointly awarded to James Allison and Tasuku Honjo for their discovery of cancer therapy by inhibition of negative immune regulation. “Allison and Honjo’s discoveries have added a new pillar in cancer therapy,” said Kärre. “The seminal discoveries by the two laureates constitutes a paradigmatic shift, and a landmark in the fight against cancer.”

In order to understand why Allison and Honjo received the 2018 Nobel Prize, it’s necessary to wind back the clock a couple of decades. In the 1980s, scientists had discovered T-cell receptors which bound to structures recognised as ‘non-self’, to use Kärre’s terminology. Additional protein complexes on the surface of T-cells, called co-receptors, were found to influence whether or not the body’s immune system was called to action upon detection of a foreign body. Some of these co-receptors accelerated the process, whilst others had quite the opposite function, acting as ‘brakes’ and inhibiting the immune system’s response.

CTLA-4 is one such ‘brake’. In 1996, James Allison was part of a team which demonstrated that blocking the inhibitory effects of CTLA-4 can allow for effective immune responses against tumour cells. Meanwhile, across the Pacific, researchers at the University of Kyoto were investigating a similar ‘brake’, PD-1. A related molecule to PD-1 was found not only on antigen-presenting cells, but also on cancer cells, meaning some cancer cells could slip past the body’s defences by inhibiting the immune system’s response.

Tasuku Honjo was one of these researchers, and, alongside his colleagues, he demonstrated that the spread of melanoma cells to the liver was inhibited in mice deficient in PD-1. In other words, by preventing PD-1 from jamming the brakes, Honjo and his team allowed the mice’s immune system to fight cancerous cells, without the need for invasive treatment.

The sea-change instigated by these therapies is perhaps impossible to understate. Unlike many cancer treatments which directly target cancerous cells, the immuno-oncological treatments pioneered by Allison, Honjo, and others harness the body’s immune system in order to fight cancer.

Fast-forward back to 2018, and the use of immunotherapies to treat cancers is booming. Alongside CAR-T immunotherapy, which involves the genetic modification of T-cells to facilitate a more potent response to cancer, checkpoint inhibitor therapies (the likes of which won Allison and Honjo a Nobel Prize) have received market approval in treating sixteen types of cancers and one tissue-agnostic cancer indication.

“Allison and Honjo’s discoveries have added a new pillar in cancer therapy,” Kärre in his Karolinsa Institute presentation. “It represents a completely new principle, because unlike previous strategies, it is not based on targeting cancer cells, but rather the ‘brakes’ – the checkpoints – of the host’s immune system. The seminal discoveries by the two laureates constitutes a paradigmatic shift, and a landmark in the fight against cancer.”

Science never rests, of course, and in the two short years since Allison and Honjo’s award, immuno-oncology has seen a number of new ideas brought to the fore. New targets, such as Siglec-15, and new directions were reviewed at the 2019 Cancer Immunotherapy Workshop, including neoantigens, oncolytic viruses, cytokines, and, remarkably, cancer vaccines.

Just like polio or smallpox, cancer may one day prove to be not nearly as insurmountable a foe as it is today. LGC’s range of immuno-oncological research materials is designed to support scientists working in this highly advanced and ever-changing field. Our IDO1 and TDO inhibitors, including epacadostat and LM 10, are helping researchers around the world advance the fight against cancer. Get in touch for a custom quotation, and let us help you do science for a safer world.