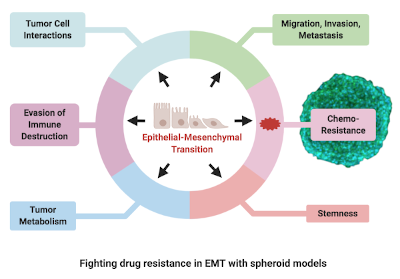 Epithelial to Mesenchymal Transition (EMT) is a phased process by which epithelial cells convert to a mesenchymal phenotype, undergoing a disruption of cell-cell adhesion, changing of cellular polarity, extracellular matrix adhesion and cytoskeleton remodelling, leading to increased cellular invasive and migratory properties. EMT occurs in normal physiological processes including embryonic development but is also hyperactivated in many different types of cancer including triple-negative breast, head and neck, epithelial ovarian, non-small-cell lung cancer, pancreatic and colorectal.

EMT inducers include hypoxia, cytokines and growth factors such as TGF beta secreted by the tumour microenvironment. Cancer cells often exhibit a “partial” EMT phenotype in which different clusters of cells in tumours express mixed mesenchymal and epithelial genes and move together, often with increased aggressive properties in comparison with cells that have undergone a full EMT conversion.

Tumour metastasis is proposed as a two-stage process in which EMT leads to invasion, with tumour cells arriving at metastatic sites undergoing a mesenchymal to epithelial (MET) phenotype reversion, in a process linked with establishment of distal tumour metastasis.

Simultaneous targeting of multiple pathways, receptors, kinases, phosphatases and downstream effectors has met with some clinical success, consistent with the role of feedback and crosstalk in regulating these complex biochemical networks. Broad ranging EMT drug targets in active clinical trials include TGF-β, MEK, mTOR and EGF, frequently in combination with other treatments including immune checkpoint targets such as PD-L1.

Despite recent clinical successes, EMT remains central to the progression of many cancers and more research needed to understand its complexities. Identification of druggable targets requires clinically relevant in vitro models of EMT with defined genetic backgrounds.  Given the key role of cell-cell interaction and extracellular matrix in EMT, 3D models present apparent advantages over classical cell culture systems.

A recent comparative study of spheroid and classical 2D cultures of head and neck cancer supports the view of spheroids as a superior EMT model, demonstrating they are more resistant to treatment with cisplatin and EGFR blocker Cetuximab than corresponding 2D cultures and additionally express upregulated EMT markers CDH1, NANOG and SOX2, more representative of in vivo cancer behaviour.

More work is required to map out effective combinations of EMT therapy targets and to translate this work through to the clinical, but it is clear in vitro 3D models have a key role to play in the early phase of this work.

ATCC has generated a range of EMT reporter models from clinically relevant cancer lines including triple-negative breast, colorectal and pancreatic models. All lines are well characterised with a large amount of associated data. Our Tech Team are happy to address any questions you may have relating to these models and can be contacted at bio.tech@lgcstandards.com.

Looking to modulate the velocity of enzymatic reactions? Browse our range of inhibitors and activators for enzymes like kinases, phosphatases and proteases that target signalling pathways involved in EMT and tumour metastasis.

Note on the author

Joe Lackey is a published author who holds a PhD in Cell Signalling and Cancer from the University of Dundee and has worked as an ATCC Technical Specialist for almost four years. Joe is writing this series of blogs to explore his significant interest in the role in vitro models have to play in drug discovery, within the greater context of advances in Precision Medicine and the journey to the clinic.