Phytochemicals against COVID-19 – the tip of the iceberg? 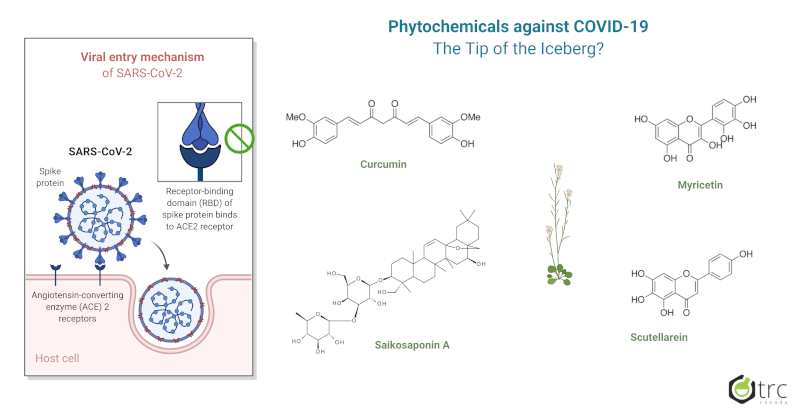 MORE than 18 months after COVID-19 first emerged in China, researchers all over the world are still searching for novel diagnostic, preventative and therapeutic interventions against it.  Although vaccinations are beginning to turn the tide against the disease in some countries, hundreds of thousands of new cases are still reported daily across the globe – meaning that developing effective treatments for people who contract coronavirus remains key.

While one antiviral medication - Remdesivir – has been approved for use in the US, Canada, the UK and EU since mid-2020, controversy still exists regarding its effectiveness, and the stage at which it should be given to patients. Late last year - the same month that Remdesivir was used to treat former US President Donald Trump - the World Health Organisation declared that it had “little or no effect” on survival chances.

Meanwhile, the UK RECOVERY trial to test existing drugs on COVID patients showed that other promising-looking treatments – such as the malaria drug hydroxychloroquine, the HIV combination lopinavir/ritonavir and the antibiotic azithromycin – ultimately had no significant effect.

The quest to find new treatments for COVID-19 has coincided with a broader revival of interest from major pharma companies in using naturally-occurring phytochemicals as sources for new lead structures. There is mounting evidence to show that phytochemicals from a diet that is rich in fruit and vegetables can reduce the risk of age-related chronic diseases, including coronary heart disease, diabetes, high blood pressure and certain types of cancer. Life-saving medicines such as aspirin and quinine have also been manufactured from plant sources, but the development of synthetic techniques in the pharmaceutical industry led to a significant reduction in the importance of natural products until recently.

Nowadays, a combination of greater ecological awareness and perceived limits on the capacity of modern technology to provide new products has led to increased focus on using natural sources in novel drugs. All of which means that phytochemicals are once again being studied extensively, as we search for an effective treatment against COVID-19, and the SARS-CoV-2 virus that causes it. Other benefits of using plant secondary metabolites in the fight against Covid-19 also include their lower toxicity profiles and cost-effectiveness.

Recent laboratory studies have shown that viral non-structural proteins (NSPs) play a significant role in replicating and transcribing the viral genome and in overall COVID-19 infections. This means that inhibiting these NSPs – and specifically NSP15 - can slow viral replication and provide a potential drug target when developing a COVID-19 inhibitor.

Encouragingly, university researchers in New Delhi and Chandigarh claim to have identified “the binding potential of approximately 50 phytochemicals with NSP15 and capable of inhibiting the viral replication.”

“The assumption is that inhibition of NSP15 slowdowns the viral replication,” they wrote in Phytomedicine in May. “NSP15 protein was selected because it shows 89% similarity to the other SARS-CoV, which caused the earlier outbreak [in 2002-4].”

The Delhi-Chandigarh team used molecular docking to study the interaction of various phytochemicals with NSP15, while other players are looking at in-silico approaches to explore the binding potential of phytochemicals.  A separate computational study by Belgian and Indian scientists at the ICMR Regional Medical Research Centre in Odisha and the University of Leuven also concludes that, while repurposing existing drugs might be “an attractive option” for controlling SARS-CoV-2, phytochemicals “could be promising as well.”

“Although since the COVID-19 outbreak more than 5000 review papers have been reported in PubMed,” the Belgo-Indian group argues, “the importance of natural products against SARS-CoV-2 has not been explored much.

“There is literature on various nature-derived compounds with potent anti-SARS-CoV and anti-MERS-CoV activity [and] it is clear that there is a close sequence similarity between SARS CoV-2 and SARS-CoV or MERS-CoV. Using computational approaches to repurpose these anti-SARS-CoV or anti-MERS-CoV natural products could lead to candidates for developing a safe and cost-effective COVID-19 drug.”

The Odisha-Leuven team also predicted a long research road before we arrive at an effective anti-COVID treatment. “The challenges are considerable,” they wrote. “More research will be necessary to study the mechanism of action underlying protection against the cytopathic effect of CoV, and crystallography to confirm the interaction of the phytocompounds with viral target proteins.

“In addition, advanced computational program and machine learning may also play a vital role in finding the most effective potential anti- COVID candidates.”

From research to quality control standards, TRC has developed a series of products to support the scientific community in the development and controls of candidate vaccines and therapeutics against SARS-COV-2. We offer several featured products aimed at providing researchers with the best tools for their COVID-19 analysis - including phytochemical standards and their metabolites, along with isotope labelled alternatives.

Whether your research is focused on slowing the infection via targeting viral replication, or combatting the virus by gaining insights into potential repurposed treatments—we have all the tools needed for your cutting edge COVID-19 research. Learn more and explore our range or get in touch to talk about your needs.