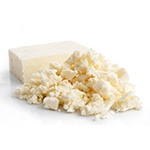 Milk and dairy products are commonly consumed by people of all age groups. They are recognised as important foods for human diet and  are considered nutrient dense foods contributing to our protein, fat, vitamin and elements (especially Ca) daily intake. Cheese is a concentrated dairy product made by coagulating the major protein fraction, casein (80% of total protein in milk) and draining the whey (20% of total protein in milk). Cheese is a concentrated source of many nutrients and the amount retained in the curd depends on the raw milk material, the type of cheese and the production method. Together with important nutrients it may also contain trace levels of certain contaminants such as Aflatoxin M1 (AflM1).

AflM1 is the metabolite of Aflatoxin B1 in mammals which may be present in milk from animals fed with contaminated feed. According to Ardic et al. (2009), cheese can be a major potential source of AflM1 compared to other products as the toxin is associated to the casein fraction of milk which coagulated during cheese production. Studies have shown that levels of AflM1 can be 2-5 times higher in soft or hard cheese compared to the raw milk material depending on the cheese production method.

The European Commission Regulation (EC) No 1881/2006 sets maximum levels for aflatoxins in raw milk, heat treated milk and milk for the manufacture of milk-based products at 0.050 μg/kg. In other countries higher maximum levels have been set, in Brazil and China as high as 0.50 μg/kg. Some countries have adopted maximum levels in dairy products. For example in Italy, the maximum level for soft cheese is 0.250, 0.450 μg/kg for hard cheese and in Brazil is 2.5 μg/kg.  Numerous methods for identification and quantification of AflM1 exist, immunochemical methods are used such as rapid absence/presence tests, whilst ELISA and chromatographic methods, mostly HPLC, are used for quantification.

Carmagnollo et al (2016) have collected data for AflM1 in cheese from surveys carried out in a number of countries. AflM1 was frequently detected, for example in a survey of 193 Turkish white brined cheese, 159 were contaminated whilst in an Italian survey, 223 samples of Grana Padano cheese were tested of which 219 were contaminated. The levels may vary according to the type of cheese and the origin of the raw material. The International Agency for Research on Cancer (IARC, 2002) considered AflM1 as “carcinogenic to humans” in Group 1. Because of the high incidence of this mycotoxin in milk and dairy products, its presence in food can be considered an issue of major relevance for public health.

It is therefore, very important to monitor the levels of AflM1 in dairy products.  To help you demonstrate the quality and reliability of your analysis we have introduced a new sample material to our dairy chemistry proficiency testing scheme. Sample 62 - Aflatoxin M1 in soft cheese is available in round CH252 to be despatched 24-25 April 2017. For more details please see Scheme Documentation. To participate please complete the Application form and return it to ptcustomerservices@lgcgroup.com.