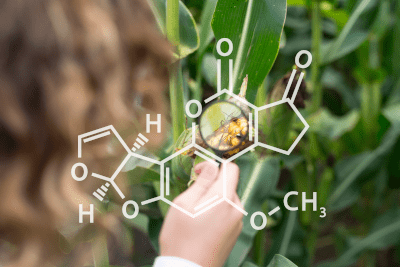 Produced as secondary toxic metabolites by Aspergillus fungi, aflatoxins are potent carcinogenic mycotoxins that can affect all organ systems, especially the liver and kidneys. They are mutagenic, genotoxic, and have the potential to cause birth defects or stunted growth in children. Aflatoxins may also decrease resistance to infectious agents, bolstering the spread of infectious diseases.

Dietary exposure to aflatoxins is a global problem in both developed and developing countries, especially where there is poor regulation of their levels in food and feed. Most human exposure comes from nuts and grains – under favourable conditions typical of tropical and subtropical regions (high humidity and high temperatures), A. flavus and A. parasiticus, in particular, can invade food crops. At least fourteen types of aflatoxin have been identified, but four – aflatoxins B1, B2, G1, and G2 – are found in all major food crops, posing a particular threat to humans and animals.

Understandably, regulations surrounding aflatoxin detection are strict. The FDA mandates routine monitoring of aflatoxins and a number of other mycotoxins, alongside pesticides, industrial compounds, and heavy metals, as part of its Animal Feed Contaminants program. According to the FDA, the presence of aflatoxins in food “should be restricted to the lowest practical level.”

In Europe, regulations mandate that pre-export checks are carried out by third countries on food and feed immediately prior to export to the EU, with a view to verifying that exported products comply with EU requirements. The EU’s Guidance Document for Competent Authorities for the Control of Compliance with EU Legislation on Aflatoxins offers a comprehensive guide for internal and external authorities alike seeking to comply with regulations.

Researchers have been striving for decades to develop effective degradation strategies targeting aflatoxins in food and feed. In recent years, numerous novel methods for the degradation of aflatoxins have emerged, employing irradiation, cold plasma, ozone, electrolyzed oxidizing water, organic acids, natural plant extracts, and microorganisms. Outlined below are some of the latest developments within these fields of research, all of which offer tantalising solutions to one of the world’s great food problems.

A study published in August last year investigated the kinetics and mechanisms responsible for the destruction of aflatoxins in pure water with a UV-A light emitting diode system (LED). By irradiating known concentrations of aflatoxins AFB1 and AFM1 with UV-A doses ranging of up to 1,200 mJ/cm2, the researchers were able to reduce aflatoxin concentrations by between 70% (AFB1) and 84% (AFM1). The team hypothesized that the formation of reactive species initiated by UV-A light might cause photolysis of aflatoxin molecules in water.

High-voltage atmospheric cold plasma (HVACP) is a non-thermal decontamination technology that has potential uses in the food industry. In one 2017 study, HVACP was applied to treat pure aflatoxin powder (AFB1). After five minutes of treatment, the aflatoxin was degraded by 76%, with six main degradation products being subsequently observed. Two of these were ozonolysis products of AFB1, but the presence of the remaining four indicated that the aflatoxin was degraded by other reactive species generated during the HVACP treatment. The study’s authors hypothesized that reactive oxygen gas species were a major agent for degradation.

The effects of ozone (O3) on fungal degradation have been documented in numerous studies. O3 is a strong oxidiser which disrupts fungal cells by oxidising sulfhydryl and amino acid groups of enzymes, or by attacking the polyunsaturated fatty acids of the cell wall. Fusarium is amongst the most sensitive fungi to O­3 treatment, followed by Aspergillus and Penicillum.

One 2013 paper found that the application of O3 to peanuts at a concentration of 40ppm for 10 minutes resulted in the degradation of AFB1 and AFB2 at 94.58 and 99.49%, respectively. The process also resulted in a reduction in fat and protein content of 10.56 and 4.58% respectively, with the study’s author, Professor Mosaad Attia Abdel-Wahhab, concluding that O3 treatment “may be used effectively for the decontamination of aflatoxin-contaminated peanut seeds.”

A more recent study investigated the effects of O3 treatment on four aflatoxin solutions in triple-distilled water (AFB1, AFB2, AFG1, and AFG2.) The ability of O3 to degrade aflatoxins was documented, even at concentrations as low as 8.5ppm. Interestingly, at aflatoxin concentrations of 10 ppb and 2ppb, the complete and rapid elimination of AFB1 and AFG1 was observed while AFB2 and AFG2 remained more or less stable.

In recent decades, electrolysed oxidising (EO) water has come to be regarded as a sanitiser with a wide range of applications, particularly within the food industry. As an effective, easy-to-use disinfectant that is environmentally friendly and relatively inexpensive, EO water has a number of advantages over traditional cleaning agents. It is also considerably safer than other cleaning agents such as hydrochloric acid or sulphuric acid, in that it is not corrosive to skin or organic material.

Acidic EO water is prepared with an electrolysis apparatus with an ion-exchange membrane. It has been shown to reduce the content of AFB1 in contaminated peanuts by around 85% following a 15 minute immersion at room temperature. Crucially, acidic EO water does not appear to alter the essential nutritional content of peanuts. The effectiveness of acidic EO water in targeting AFB1 is correlated with temperature, as well as the available chlorine concentration (ACC) of the EO water being used.

The use of food-grade organic acids represents a novel and potentially safer solution to the problem of aflatoxin contamination than previously mentioned methods. A study published in August 2020 compared the efficacy of three food-grade organic acids – citric, lactic, and propionic – at five different concentrations (1, 3, 5, 7, and 9%) in targeting AFB1 specifically and AFB­11, AFB2, AFG1, and AFG2 in total in selected nuts, including almonds, peanuts, pistachios, and walnuts.

Researchers subjected the foodstuffs to a 15 minute treatment, comparing two different moisture levels (10 ± 3 and 16 ± 3%), to encouraging results. The use of each acid at 9% concentration resulted in total aflatoxin degradation of between 96 and 99.9%, with citric and lactic acids converting AFB1 into “less toxic products identified as AFD1 via hydrolysis of the lactone ring.” Citric acid was found to be the most efficient in degrading total aflatoxins, although in a 2015 study, lactic acid was determined to be the most efficient in degrading AFB1, achieving 85% degradation at a temperature of 80°C.

Some plant extracts have been shown to exhibit natural detoxification properties. In one study, the leaf extract of vasaka (Adhatoda vasica Nees), also known as Malabar nut or adulsa, achieved ≥98% degradation of AFB1 in vitro after incubation for 24 hours at 37°C. The extract’s detoxifying effects were significantly reduced when heated to 100°C for 10 minutes, whilst dialysis had no effect on its aflatoxin detoxifying ability. Approximately 69% of the AFB1 was degraded within six hours of incubation.

Microorganisms have been considered as a potential means of targeting aflatoxins for some time. Biological methods such as the use of microorganisms or enzymes represent a particularly enticing option for aflatoxin degradation, as they cause no contamination, have high specificity, and work at high temperature, affording environmental protection.

A 2009 study found that some aflatoxin-producing Aspergillus species possess the capability to degrade their own synthesized mycotoxins. Researchers postulated that yeasts and lactic acid bacteria work as “biological adsorbents that prevent aflatoxin’s transfer to the intestinal tract of humans and animals.” AFB1 absorbed into the organism can be metabolised in a number of different pathways, leading to the production of either relatively nontoxic compounds, or highly toxic active forms, depending on the pathway in question.

More recently, a 2018 study by a team of Chinese researchers demonstrated efficient degradation of AFB1 (89.1%) within 120 hours of Bacillus licheniformis (BL010) treatment. A crude enzyme solution of BL010 exhibited the highest degradation level (97.3%), with the bulk of the degradation taking place within 24 hours. Uninduced BL010 was, however, incapable of reducing AFB1.