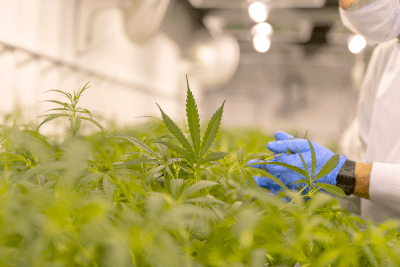 While THC is perhaps the most notorious cannabinoid in pop culture, there are many other such compounds produced by the cannabis plant, the importance of which we are only just beginning to understand.

The first discovery of a cannabinoid, cannabinol (CBN), was made by British chemist Robert S. Cahn in 1940. But it wasn’t until 1942 that American chemist Roger Adams discovered cannabidiol (CBD), recently the subject of much attention due to its purported anxiety relieving effects. Perhaps surprisingly, however, at least 113 cannabinoids have been identified to date, with many more likely to be discovered.

Although THC is the psychotropic agent of cannabis, the minor cannabinoids as well as other natural products in cannabis are very important to the overall biological effect of cannabis consumption.

In 1998, Professors Raphael Mechoulam and Shimon Ben-Shabat postulated that the endocannabinoid system in our bodies demonstrated an “entourage effect”, in which a variety of “inactive” metabolites and closely related molecules increased the activity of the primary cannabinoids anandamide and 2-arachidonoylglycerol. The duo suggested that this helped explain how botanically derived drugs were often more effective than their inpidual components, which can be either isolated from the cannabis plant or synthesized in pure form in the laboratory.1

Although single molecule synthesis remains the primary mode of pharmaceutical development, the concept of botanical synergy has been well demonstrated by documenting the contributions of “minor cannabinoids” and cannabis terpenoids to the plant’s overall pharmacological effect. In a randomized controlled trial in which cannabis-based extracts were administered to patients with persistent pain despite opioid treatment, a THC extract failed to provide relief compared to a placebo. A whole plant extract containing both THC and cannabidiol (CBD), however, worked statistically significantly better than THC and CBD extracts dosed separately.2

Due to differing historical and regional attitudes to cannabis, cannabis science is still in its infancy and as such is constantly changing – the cannabinoids outlined in the chart below are the most popular and well-studied.

CBGA and CBGVA are the parent cannabinoids of our top 17 list. These two cannabinoids react with specific enzymes in the cannabis plant to form their respective product cannabinoids. The molecules of these product cannabinoids contain carboxylic acids (think vinegar), which themselves will undergo decarboxylation (removal of the acid) in the presence of heat, light or basic conditions to form the “active” cannabinoids that improve mood and possibly health. To illustrate, below is a brief diagram of “who begat whom.”

To summarize, cannabinoids are chemicals that join with specific receptors in our bodies. The effects of these cannabinoids on our body can be increased when other Cannabis chemicals are present; this is known as the entourage effect. Over 100 different types of cannabinoids can be isolated from the cannabis plant, and we have a reasonable idea of which cannabinoids beget which. It should be noted, however, that the science is still constantly evolving, and as such, it’s important to take everything one reads about cannabinoids with a pinch of salt – which, after all, will only improve edibility.