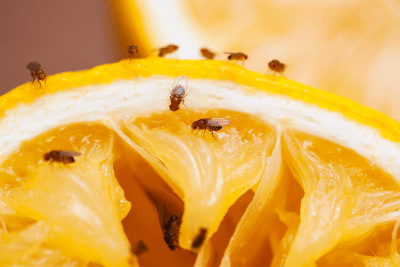 You’re looking for an afternoon snack and reach for a peach you’ve been leaving to ripen on the kitchen counter. The flawless skin has darkened to an orange-yellow color and the flesh has reached the perfect level of firmness. As you pick up the fruit, the skin feels like it’s moving underneath your fingertips; you examine the fruit, trying to determine the source of the movement. Dust? Ants? Spiders? Those are all likely possibilities. In this case, though, the skin is crawling with fruit flies.

We’ve all been there. A piece of fruit gets slightly overripe and suddenly becomes home to a colony of fruit flies. While they’re more annoying than harmful to humans, these small flies can be devastating to outdoor fruit and vegetable crops.

Enter fenthion – also known as the “silver bullet” of fruit fly insecticides. Most organophosphates act as cholinesterase inhibitors, which cause fatal disruptions to nerve functions in insects. Fenthion is no different and adequately targets small flying insects; however, this insecticide is particularly adept at targeting fruit fly populations, which might otherwise destroy thousands of acres of orchard crops.

The short half-life of fenthion made it desirable for use as an insecticide. Short-lived toxic effects followed by rapid degradation – these seem like ideal traits for a compound designed to protect our food supply. However, reports of wildlife deaths in connection with the use of fenthion insecticides have caused regulatory bodies to re-evaluate the use of this compound. The U.S. Food and Drug Administration (FDA) has banned the use of fenthion and the U.S. Environmental Protection Agency (EPA) has added it to the list of Restricted Use Pesticides (RUP). A number of other countries have also added this compound to their lists of banned pesticides, including India, Australia and the EU.

While it’s important to maintain a comprehensive list of pesticides that are approved, restricted or banned, it’s not enough to just compile the list. Restrictions and bans often need to be enforced with routine monitoring and compliance checks, a requirement which highlights the importance of knowing how pesticides break down once introduced into the environment.

Our Dr. Ehrenstorfer reference material portfolio is continuously evolving to meet your analytical testing needs and keep pace with evolving regulations, trends and methods around the world.