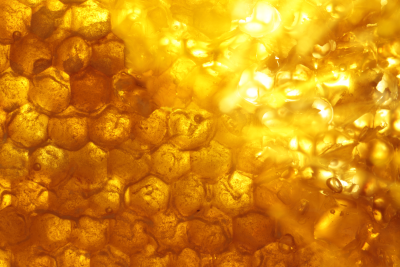 Few foods are as loaded with poetic significance as honey. In the Old Testament, the Promised Land is said to be “flowing with milk and honey”, whilst in Hinduism honey is considered to be one of the five elixirs of immortality.

Ancient humans, it seems, were so enamoured with the stuff that they gladly risked tearing open beehives to get at it, as Valencian cave paintings dating back 8,000 years have been found to depict. Perhaps it’s unsurprising, then, that today we produce somewhere in the region of 1.8 million metric tons of honey around the world each year, fuelling a global honey market estimated to be worth around seven billion USD.

Unfortunately, the thriving honey industry is also rife with incidences of food fraud. So-called ‘honey laundering’, in which honey is mixed with sweeteners such as sugar syrup or high fructose corn syrup, means honey ranks third in the world for most-faked foodstuffs, behind milk and olive oil.

In 2013, a scandal dubbed ‘honeygate’ led to five individuals and two U.S. honey processors receiving federal charges as a result of investigations into illegal importations of honey from China. Chinese honey, which was banned from sale in the U.S. in 2001, was allegedly imported to the United States after being routed through other countries; the parties responsible avoided more than $180 million dollars in anti-dumping duties.

Part of the problem facing laboratories working with honey is the fact that the verification of honey authenticity represents such a complex analytical task. For instance, it’s common practice in the United States for honey manufacturers to filter out pollen, along with dust, soil, and any other microscopic particulate matter that can cause honey to crystalize quicker than many American consumers like.

This led to a rumour in 2011 that ‘most honey isn’t honey’, in which journalists alleged that removing the pollen from honey meant it was no longer classifiable as honey. In the USA at least, this is in fact not the case – honey with the pollen removed is still honey – but it is true that an absence of pollen can make it difficult for laboratories to determine the origin of a particular honey, opening up the door for fraud.

In the European Union, the removal of pollen from any product marketed as honey is forbidden, “except where this is unavoidable in the removal of foreign inorganic or organic matter.” Additionally, the requirements of Council Directive 2001/110/EC have to be met before honey can be placed on the market in the EU. Samples of honey that deviate from this standard are non-compliant.

This does not, however, mean the European market is free from fraud – according to the European Commissions Joint Research Centre (JRC), at least 14% of honey samples tested in the market were found to be adulterated, with the most common adulteration the inclusion of sugars or syrups. A further 20% “were found to be suspicious of containing added sugar.”

At LGC, we offer a range of products and services to assist laboratories working in the field of honey authenticity, including three AXIO Proficiency Testing schemes to help certify the validity of your findings.