API of the month: Linezolid 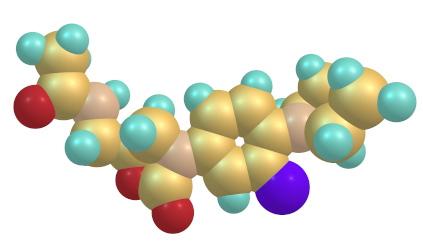 Linezolid, also known as Zyvox or Zyvoxid, is a synthetic antibiotic used to treat drug-resistant bacterial infections, the first commercially approved agent in the oxazolidinone class of antibiotics1. It is primarily used for infections of the skin and pneumonia, as well as other stubborn infections including drug-resistant tuberculosis.

Discovered in the 1990s and approved in 20002, linezolid is effective against Gram-positive bacteria that have not responded to other drugs, such as streptococci, vancomycin-resistant enterococci (VRE), and methicillin-resistant Staphylococcus aureus (MRSA), making it a last line of defence against severe infections. As such, it is used sparingly and bacterial resistance to it remains low (0.05% as of 2017)3.

Linezolid acts by inhibiting the initiation of bacterial protein synthesis4 rather than later elongation, a mechanism of action distinct from that of any other commercially available antibiotic, meaning cross-resistance with other protein synthesis inhibitors is almost non-existent5. Its action is primarily bacteriostatic, preventing growth and exotoxin production, but it has exhibited bactericidal activity against streptococci6. Another unique feature of linezolid is its absolute oral bioavailability of 100%; comparable antibiotics such as vancomycin can only be administered intravenously, making linezolid the sole antibiotic of its type that can be taken orally7.

Representative and alternative synthesis routes of linezolid and a detailed accounting of its process and degradation impurities can be found here. 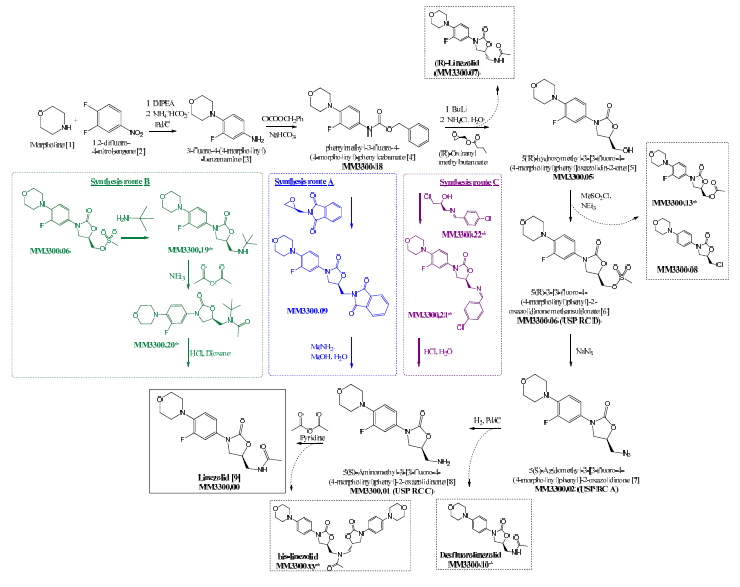 In summary, starting materials in the representative route are Morpholine [1] and 1,2-Difluoro-4-nitrobenzene [2], from which carbamate MM3300.18 is formed in three steps. The carbamate is an important process-related impurity, as it is an intermediate in all synthetic routes. Oxazolidinone MM3300.05 is also an important intermediate of Linezolid, and will in turn react with mesyl chloride to provide the mesyl derivative MM3300.06, or can undergo acetylation to form impurity MM3300.13, while residuals of (S)-glycidyl butyrate from the MM3300.05 formation will lead to formation of the enantiomeric impurity (R)-Linezolid MM3300.07.

Other impurities that can be formed on this synthesis route include MM3300.08, azide intermediate MM3300.02, free amine MM3300.01 and Desfluorolinezolid MM3300.10. The final acetylation of the amine yields the API Linezolid MM3300.00, during which step free amine still present can react in situ with the newly formed API by dimerisation, leading to bis-linezolid MM3300.xy.

Meanwhile impurities MM3300.09 and MM3300.19 are formed in alternative synthesis routes A and B respectively, with subsequent acetylation in B also forming MM3300.20. Synthesis route C builds linezolid from imine MM3300.22, which is coupled with carbamate MM3300.18 to give the (S)-oxazolidinone imine MM3300.21. As imines need to be built up carefully because they are sensitive to water, this process might lead to further impurities and by-products.

In contrast to process impurities, which usually remain at constant levels within the drug substance, degradation products can be formed in the final drug product and are therefore likely to enrich. Stress conditions which need to be taken into account for validations are given in ICH Q3B(R2) and comprise light, heat, humidity, acid/base hydrolysis and oxidation8. Degradation studies for linezolid show lability to acids, alkalis and oxidation, while the API seems to be relatively stable to water, thermal and photo degradation.

Oxidative stress leads to the amine oxide MM3300.04, which is therefore an impurity very likely to be present in drug products. Alkaline hydrolysis, meanwhile, leads to ring-opening and then to hydrolysate MM3300.16/17/11/12, while acid hydrolysis primarily leads to cleavage of the acetyl moiety and thus to MM3300.019.

For a more detailed reckoning of process and degradation impurities download our technical overview of impurities, and for further information get in touch with your local sales office.