Pharmaceutical Mycelia: A story of statins

Cholesterol: we all know the word, and its negative associations. So is all cholesterol bad? It’s not that simple – the fatty substance known as cholesterol is not only ingested through food, but also created by the liver, and has crucial functions without which we wouldn’t be alive.

These functions include contributing to cell wall structure, forming digestive bile acids in the intestine, and enabling the production of vitamin D and certain hormones.

One of the most commonly prescribed medications in the world, statins are a group of agents used to both lower the level of LDL cholesterol in the blood and for their antithrombotic and anti-inflammatory effects. These actions help to prevent blood clotting and build-up on blood vessel walls, thus reducing the risk of heart attacks and strokes. Common statins today include atorvastatin, fluvastatin, simvastatin and rosuvastatin. 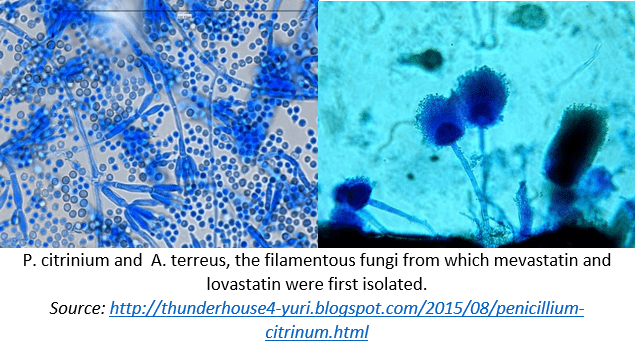 While many statins are now produced synthetically, their natural precursors were predominantly produced from Aspergillus and Penicillium fungus species. In the 1970s Japanese scientist Akira Endo began investigating HMG CoA in microorganisms and discovered mevastatin from the fungus Penicillium citrinum. Mevastatin is considered the first statin to be isolated and developed, although it never reached the market.

The first statin to market, lovastatin, was isolated from the fermentation broth of Aspergillus terreus in the 1970s by Alfred Alberts, who worked for Merck, and made available to the public in 1987 as Mevacor. But it was atorvastatin, first patented by Warner-Lambert in 1986, that was to take statins stratospheric.

A five-year study published in 1994 researching the effects of Merck’s synthetic lovastatin alternative, simvastatin, on patients with high cholesterol and heart disease found a 35% reduction in their cholesterol and 42% lower chance of dying of heart attack in the period. Early results comparing atorvastatin to simvastatin indicated that Warner-Lambert’s drug was both more potent and had fewer side effects, so in 1996 atorvastatin reached market under the name Lipitor, in a joint agreement with Pfizer, who later acquired Warner-Lambert.

Lipitor soon became a popular prescription, its arrival coinciding with an increase in average weight and cholesterol levels seen across many developed societies, and by 2003 was the best-selling medication in the US. By 2012 atorvastatin/Lipitor had become the top-selling pharmaceutical of all time, and even in the latest list of most prescribed drugs in the US (2021 list – using 2018 prescription data), it still sits at the no 1 spot, at 112 million prescriptions. 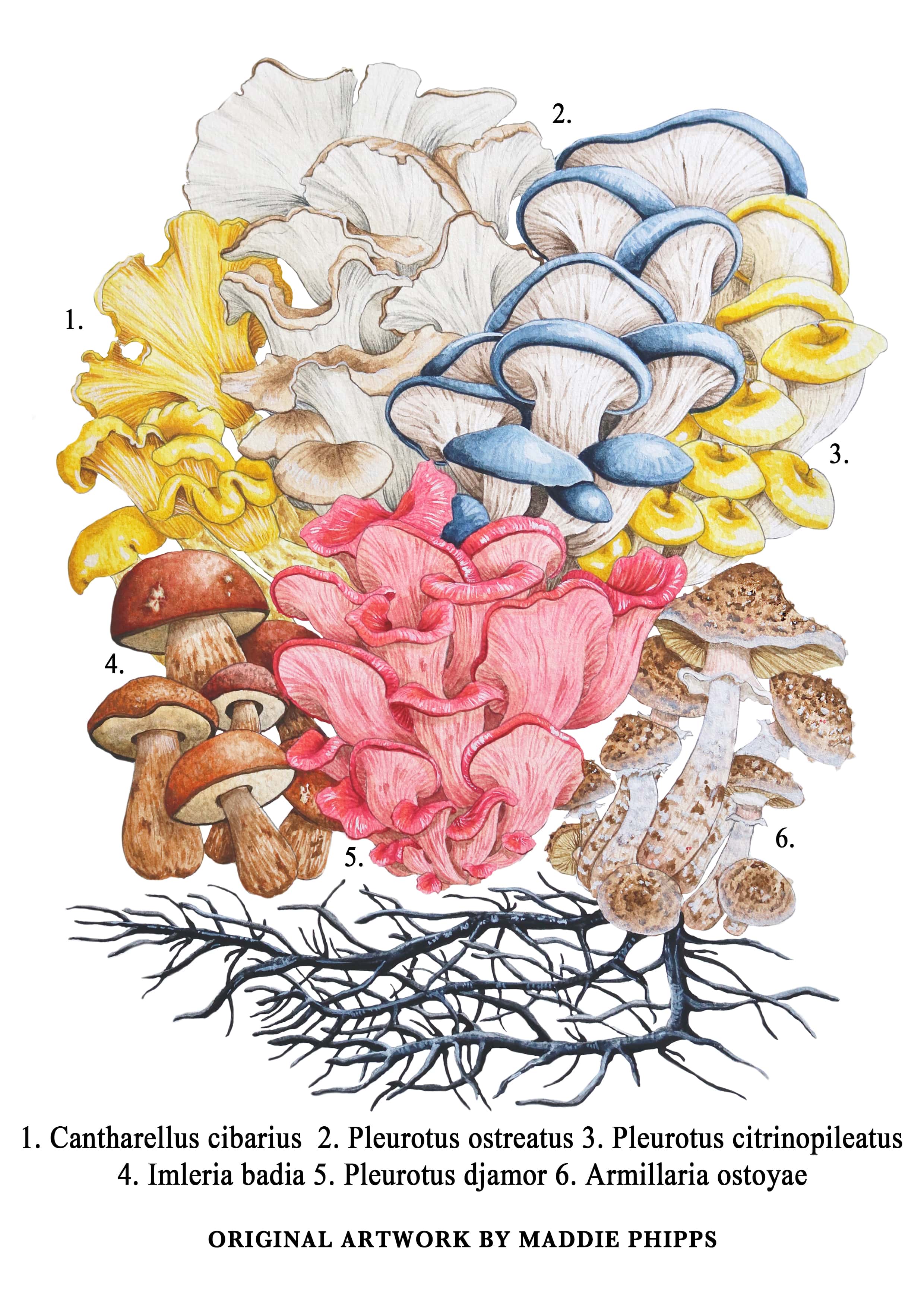 Fungi are an incredibly diverse group of eukaryotic organisms once considered like plants, though molecular evidence has shown that they are actually more closely related to animals than to plants, with a shared common ancestor who split from plant life. There are clues to their distance from plants in their cell walls made of chitin – not found in the plant world but common in insects – rather than cellulose, their lack of chlorophyll, production of spores and in the mycelium, the branching filamentous structure of hyphae.

Fungi absorb nutrients through this mycelium and many exist in a symbiotic relationship with trees, grasses and crops, known as a mycorrhiza. This complex association is essential to plant life and the mycelia of fungi can span entire forests – the largest know organism is Armillaria ostoyae, which covers 3.4 square miles (8.8 km2) in the Malheur National Forest. It is aged between 1900 and 9600 years old.

Some species of fungi are even carnivorous, with mycelia that can digest living organisms such as nematodes: species in the saprotrophic Pleurotus mushroom genus are good examples. While lovastatin was found in A. terreus, it is also produced in some higher fungi, most of which are in the Pleurotus genus. It is most known in P. ostreatus, the oyster mushroom, which contains up to 2.8% lovastatin on a dry weight basis, but can also be found in P. djamor, Imleria badia, and Cantharellus cibarus, among others.

Edible mushrooms, meanwhile, have been collected for food for thousands of years, with archaeological evidence that they may have been used as far back as 6800 years ago in Neolithic China. Many mushrooms are psychoactive, which led to roles in medicinal and ceremonial activities in indigenous tribes. Even the common red-and-white spotted mushroom Amanita muscaria or fly agaric, which features in children’s picture books, garden ornaments and video games, is actually hallucinogenic.

Statins can be divided into three groups based on how they are obtained. As mentioned, mevastatin and lovastatin are naturally occurring statins obtained via fermentation methods. These two compounds can then be modified to give semi-synthetic statins – pravastatin, which is derived from mevastatin, and simvastatin, which is derived from lovastatin. The third class of statins are fully synthetic, including fluvastatin, rosuvastatin and atorvastatin, among others. Fluvastatin was the first fully synthetic drug to be developed. Atorvastatin is commonly sold as a calcium complex, featuring two atorvastatin ions and a calcium ion. Rosuvastatin is marketed in the same way. 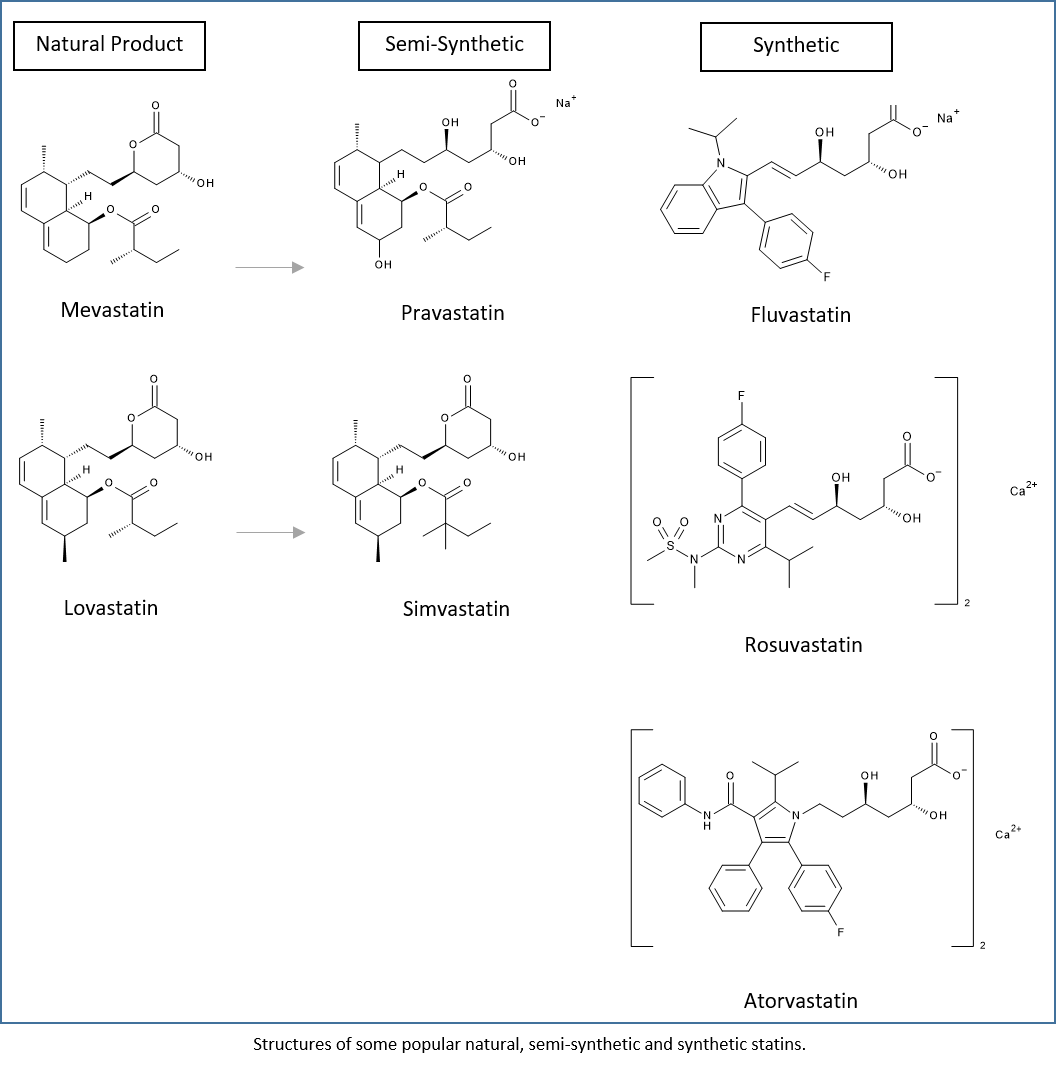 Simvastatin possesses an additional methyl group on the butyrate ester, lending the drug a much higher bioavailability than lovastatin. To obtain simvastatin, lovastatin is reduced using lithium hydroxide, resulting in a compound with two hydroxy groups that are susceptible to reaction (Figure 2). Since the hydroxy on the lactone functional group is necessary for enzyme binding, it is protected by organosilicon compound TBDMS in the presence of imidazole, leaving the other hydroxy free to react with 2,2-dimethylbutyryl chloride. If the hydroxy group isn’t properly protected the compound can undergo esterification to give Imp B, or be completely removed to give Imp C. Simvastatin can also dimerise (Imp D). 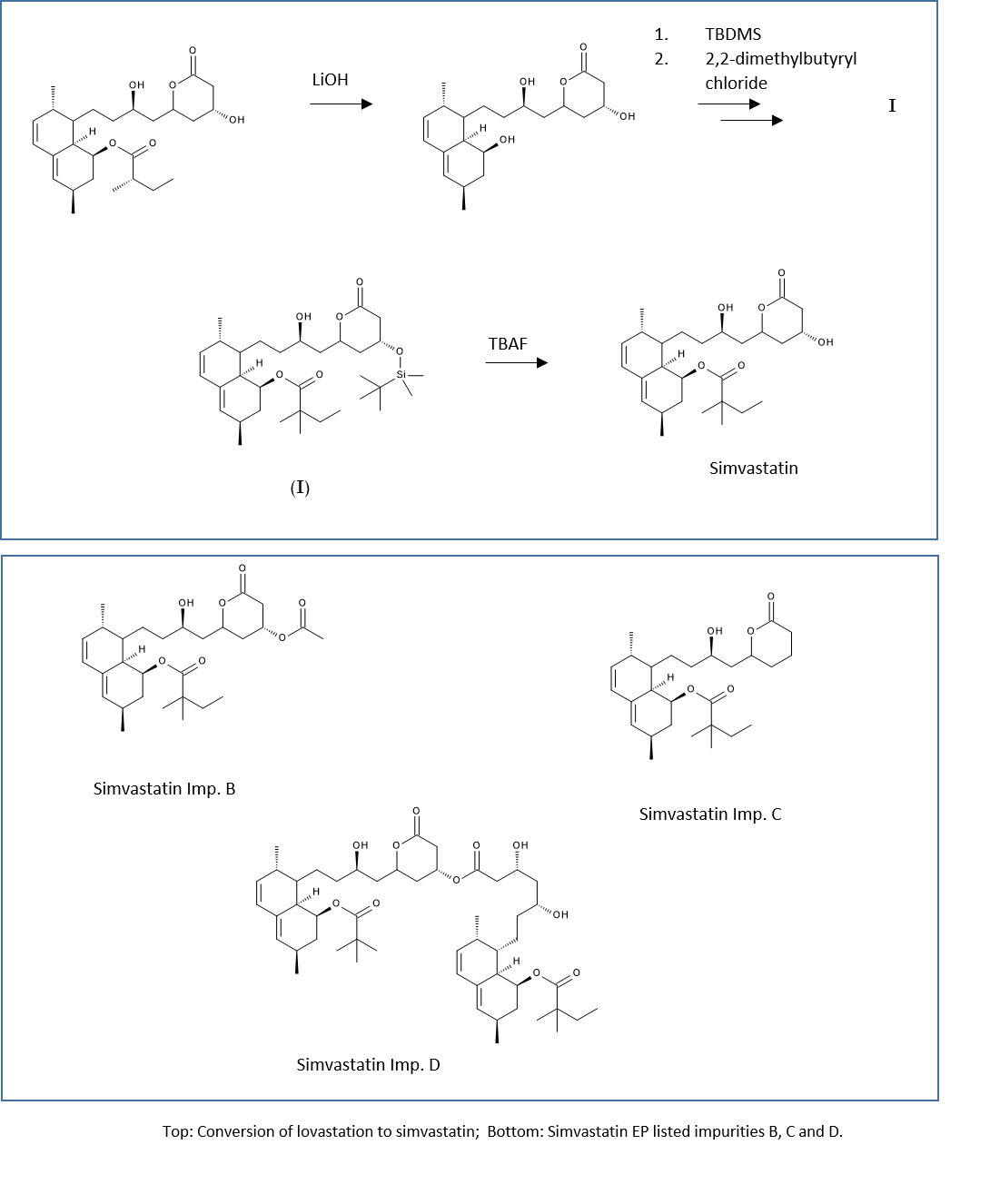 Statins work by binding competitively to an enzyme known as HMG-CoA reductase. This is a rate-controlling enzyme in the mevalonate pathway, the metabolic process responsible for cholesterol production. The enzyme catalyses the conversion of metabolic intermediate HMG-CoA to mevalonic acid.

A clear difference between most of the natural statin compounds and the synthetic ones is the presence and absence of a lactone group. This is because mevastatin, lovastatin and simvastatin are administered in their prodrug form. Prodrugs are an important class of drug delivery systems, which provide a means to improve bioavailability, improve how a drug interacts with cells, and prevent unwanted side effects. Prodrugs themselves are chemically inactive, but after administration are metabolised into the pharmacologically active drug. In this case, the lactone group is hydrolysed in the liver to form a hydroxy acid form (Figure 3) which bears a considerable similarity to the structure of HMG CoA. This similarity in structure allows the statins to fit into the active site of HMG-CoA reductase and competitively inhibit cholesterol synthesis.

While statins are already hugely popular drugs, there is evidence that these fungi-derived compounds may have even more medical uses than currently confirmed.

Even within their current medical functions, they may have more expansive potential uses: few controlled trials of statins have included patients over 70 years old, because the assumption has been that their effects would be of limited use in people with a shorter life expectancy, and might even be damaging. However, a 2020 observational study of 320,000 patients aged 75 years and older, free of heart disease and taking statins for the first time, found a 25% lower risk for death and a 20% lower risk for cardiovascular death over seven years than those not prescribed statins. A further two studies have also indicated that statin use benefits elderly patients as much, if not more than, younger ones.

Data has also indicated that statin use could help protect against cardiotoxic chemotherapy, with statins associated with a 55% reduced likelihood of hospitalisation for heart failure in breast cancer chemotherapy patients over five years in one analysis.

Outside cardiovascular use, statins have also been suggested to have therapeutic potential in a wide range of other areas, from dementia to lung cancer. Stroke risk seems to be reduced through statin use, with meta-analysis of 19 studies finding that the prevention of ischemic stroke was striking enough to outweigh any associated risk. Compelling studies also suggest that statins offer ‘endothelial protection…as well as antioxidant, anti-inflammatory and anti-platelet effects’, which could have potential for treatment not only of stroke but also in neurological disorders such as Alzheimer’s, Parkinson’s and MS.

Lungs are also impacted: statins have also been demonstrated to have potential to lower the mortality rate in patients with chronic obstructive pulmonary disease (COPD), and in population studies long-term statin use has been associated with improved overall lung cancer survival times.

There has also been exploration of prescription of statins for immune and inflammatory disorders, to treat parasitic diseases, and for their antibacterial properties. Whatever the clinical use, they all have one aspect in common: they need high quality, safe and reliable pharmaceuticals to provide patients with efficacy and peace of mind. This is where Mikromol can help – we support your pharmaceutical quality testing for a wide range of statin APIs and related impurities, with certified reference standards created by our expert chemists.

If even some of these many potential additional uses for statins prove to be fruitful, it will further cement their place in the pharmaceutical hall of fame. But one thing’s for sure: these versatile compounds have already changed the world for the better.