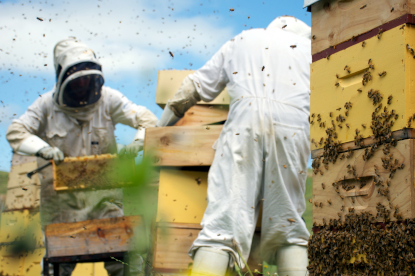 It’s unlikely to be ‘new news’ for anyone that the steep decline in the global bee population has the potential for a catastrophic effect upon the world’s ecosystems, but it’s a story that will not be going away any time soon. According to Greenpeace, the work of bees and other pollinating insects has an estimated economic value of $265 billion annually and a third of all our food production depends upon their pollination. There has been an estimated 40% loss of the commercial honeybee since 2006 in the US alone, while the UK has seen a 45% loss and Europe 25%. Governments and regulators are under increasing pressure to address this decline in bee population, with a priority placed upon reducing the impact on bee colonies of pesticides used in agricultural production.

France has led the way in starting to proactively address this impact by banning five neonicotinoid (NNI) insecticides that have proven to be particularly harmful to the environment, especially pollinators including bees. Last September the French government placed a comprehensive ban on the use of clothianidin, imidacloprid, thiacloprid, acetamiprid and thiamethoxam by all users, including professional and amateur applications.

The French government describe this as a ‘decisive step forward in the fight against the massive decline in bee colonies and wild pollinators’. It is unlikely to be the last such action in this fight, and similar legislation is likely to spread worldwide as NGOs, the public news agenda and of course the risk to global food production exert more influence on governmental policies on the use of insecticides.

The importance of the humble honeybee has never been more widely appreciated and regulators are taking notice. Laboratories testing pesticides in food and the environment are adapting to ensure that analysis of insecticides, including neonicotinoids, is effective in supporting these regulatory changes and is well positioned to respond to this demand for science for a safer world.

Dr. Ehrenstorfer can support you in your analysis of neonicotinoids, including all five banned by the French government, with high quality neonicotinoid and other insecticide reference materials, including a high number of products accredited to ISO 17034. Discover our range here.

You can read more from the French government about their insecticides ban here.