Can 3D models solve the predictability crisis in renal toxicology?

Renal toxicity accounts for one in four adverse drug reactions, including a large number of deaths and hospitalisations, yet existing models do not eliminate a majority of renal toxic compounds in advance of clinical trials. This blog outlines recent breakthroughs in cell immortalization, 3D culture and stem cell technologies that have equipped researchers with an impressive array of novel tools, allowing for generation of ever more lifelike in vitro models, with potential to precipitate significant advancements in the field of renal toxicology screening.

The kidney is highly complex, composed of a million nephrons, each made up a proximal and distal tubular segment and filter unit consisting of glomerulus, in which blood plasma is filtered. The renal proximal tubule (RPT) is a major site for transportation of small molecules, facilitated by high concentrations of cellular transporter proteins that are also important for transporting drugs. The RPT is particularly sensitive to drug induced toxicity and has therefore been a major focus of in vitro toxicology assay development for many decades. Indeed, guidelines released from The US Food and Drug Administration in 2020 recommend RPT cell based toxicology models for investigation of renal drug / transporter interactions.

Until recently, researchers attempting to model renal toxicity had only two realistic options, animal models and in vitro primary cell cultures. Animal models pose ethical issues, are expensive and crucially, do not always translate to humans. While primary cells closely mimic cells in the body, their limited lifespan and tendency to lose characteristics over time reduces their suitability for use in more advanced toxicology models.

Application of traditional 2D screening methods to renal toxicology has not always met with great success, likely because cells grown on flat plastic do not look like the cells and tissue in the body and biochemically speaking, toxicology-relevant proteins such as transporters are often not present at physiologically relevant levels.

More recently, researchers hypothesised that attempting to recreate a more realistic microenvironment and 3D architecture of the kidney in vitro may lead to more predictive assays. 3D modelling, however, requires cells with proliferative capacity over and above normal levels of primary cells. Invention of the important htert immortalization technique led to generation of models such as the RPTEC / TERT1 epithelial line, which exhibits an extended lifespan as well as a normal and stable complement of chromosomes.

In an innovative 2018 study carried out by Dr Phillip Secker at the University of Konstanz, RPTEC / TERT1 cells were cultured in 3D, supported by a gel matrix, leading to formation of highly differentiated and stable 3D tubular structures characterized by a branched network of cells encircling a cell-free lumen, mimicking the proximal tubule. This 3D model responded to renal toxic drugs such as Cisplatin in a much more predictive and sensitive way in comparison with the equivalent 2D model, also expressing a more normal complement of transporters.

Building on the success of these types of 3D models, Dr Nuria Montserrat working at the Institute of Bioengineering of Catalonia (IBEC) in Barcelona hypothesised that constructing a vascularised environment in vitro and fusing this with a 3D renal model would lead to a yet more defined and lifelike outcome. In this groundbreaking work, published in 2019, induced pluripotent stem cell-derived kidney ‘organoid’ 3D cultures were generated, consisting of multiple differentiated cell types from the nephron. At day 16, cultures were transferred into a chicken egg membrane, from which blood vessels grew into and around organoids, promoting further maturation of the glomerulus and tubules.  The more lifelike nature of these models gives hope for better predictive toxicology outcomes, although work to prove this hypothesis remains outstanding.

Application of these types of highly advanced cultures to toxicology screening brings hope of a next generation of more predictive models that will reduce the number of adverse drug reactions, deaths and hospitalizations. That being said, the preliminary nature of this field dictates that a lot more research is required to map out the true potential of these models, in addition to their practical applicability to high throughput screening. 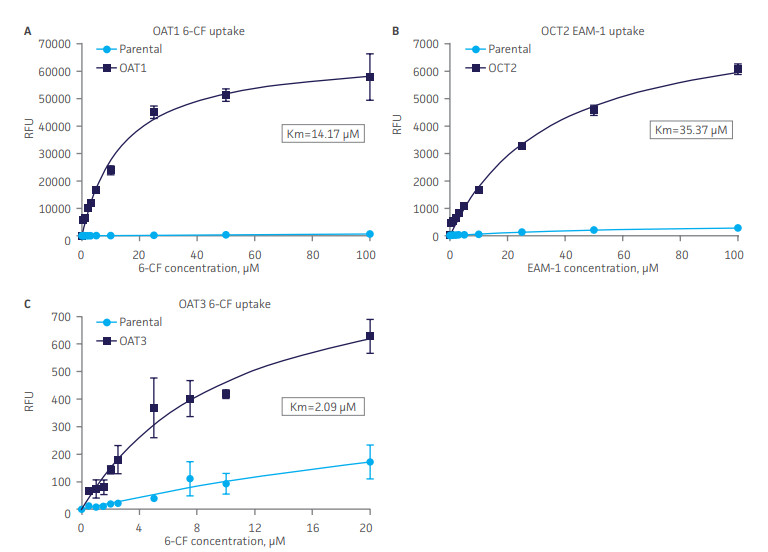 Furthermore, the transport activity in all three cell models was inhibited by known SLC inhibitors such as probenecid, quintin, novobiocin and cimetidine. Thus, the proliferative capacity, in vivo-like qualities, and substrate sensitivity and specificity of RPTEC/TERT1-OAT1, -OCT2, and -OAT3 establish these cells as valuable, physiologically relevant models of kidney function.

**LGC is the exclusive distributor for ATCC in Europe and Africa.**

TRC provides a wide range of tools to identify mechanisms and potential therapeutic targets associated with renal toxicity. Whether you are working to develop animal models to advance your understanding of human nephropathy during your preclinical research or you are working on the detection of biomarkers to assess kidney injury, we support you with our high-quality fine chemicals, modulators, biomarkers and dyes. We also provide compounds with stable isotopes for metabolic and enzymatic labelling to help toxicologists better understand drug disposing and their potential role in renal toxicity.

Notes on the author

Joe Lackey holds a PhD in Cell Signalling and Cancer from the University of Dundee and has worked as an ATCC Technical Specialist for four years. Joe is writing this series of blogs to explore his significant interests in the role in vitro models have to play in Drug Discovery, within the greater context of advances in Precision Medicine and the Journey to the Clinic.

Previous blogs by this author

Fighting Drug Resistance in Colorectal Cancer with a Triple Attack!