Step up your testing for Diesel Engine Exhaust Emissions (DEEEs) 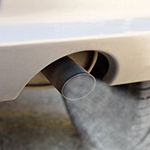 DEEEs are a complex mixture of chemicals co-existing in both vapour and particulate phases. Gaseous components constitute > 95 % of the emission mass. Major components include gases such as carbon dioxide, oxygen, nitrogen, carbon monoxide and nitrogen oxides. Minor gaseous components of sulphur dioxide and various organic compounds such as alkanes, alkenes, aromatics, carbonyls, carboxylic and other semi-volatile organic constituents can also be emitted. The particulate fraction of DEEE, diesel engine particulate (DEP), is composed of elemental carbon (colloquially known as soot), adsorbed organic compounds, and small amounts of inorganic nitrate, sulphate and trace metals.

The emitted DEP size distribution is typically bimodal in character and arises from two modes of particle formation, namely accumulation and nucleation modes. In the accumulation mode, agglomerations of particles, with aerodynamic particle diameters typically between 0.03 and 0.5 µm, are formed in the engine and consist of EC, metal oxides and adsorbed organic compounds (organic coating on a carbon core). In the nucleation mode, particles, with aerodynamic particle diameters of between 0.003 and 0.03 µm, are formed from the homogeneous condensation of gaseous sulphur dioxide (sulphuric acid droplets in humid environments) and hydrocarbon molecules. The formation of heterogeneous particles through condensation of gaseous molecules onto solid particles such as oxidised metal or pyrolysed carbon particles can also occur. Ultrafine particles (less than 0.01 µm) can penetrate deep into the respiratory tract, and hence have the potential for causing systemic health effects. The accumulation mode consists of most of the DEP mass. In contrast, the nucleation mode consists of less than 20 % of the DEP mass but can account for > 90 % of the particle number concentration. Whilst accumulation and nucleation modes predominate, a coarse mode with particles typically > 1 µm, arising from the remobilisation of deposited particles within the engine exhaust system, can also be released (Figure 2).

In 1998, IARC (International Agency for Research on Cancer) reported that the components of diesel vehicular exhaust emissions most often studied in an occupational exposure setting were particles, carbon monoxide and oxides of nitrogen as were PAHs and aldehydes. Subsequently IARC reviewed the available evidence and in 2012 reclassified diesel exhaust as a definite cause of human lung cancer (Group 1), noting a positive association (but limited evidence) for an increased risk of bladder cancer. Diesel engines are used in a wide range of workplaces, giving rise to potentially significant occupational exposure. Additionally, given the ubiquitous nature of diesel engines, there is also the potential for significant background exposure to DEEE.

The established monitoring approach, within an occupational setting, is to measure the elemental carbon (EC) component as a specific marker of worker exposure to DEEE. Standardised methods have been published such as EN 145301 (in Europe, drawing largely upon procedures set out in VDI 2465 part 22) and NIOSH 50403 (in the USA). In summary, the methodology involves collecting DEP from workplace air onto quartz fibre filters (mounted in a personal air sampler which in turn is attached to the worker) which are returned to the laboratory for combustion analysis. Upon combustion, liberated CO from EC is then either reduced to CH4 (NIOSH approach) or oxidised to CO2 (EN approach) before quantification. The instrumental limit of quantification for both methods is ~ 5 µg EC, equating to an airborne quantification limit of ~0.005 mg m-3 for full shift samples i.e. 8 hours air sampling at a nominal 2 l min-1 flow rate. In Germany, for example, a MAK (Maximale Arbeitsplatzkonzentration) exposure limit for EC has been established, at 0.3 mg m-3 for work activities involving tunnelling and mining, and at 0.1 mg m-3 for other work activities.

A new trial sample 16 has been introduced into the AIR PT scheme which will allow laboratories to assess their performance in undertaking the required combustion analysis to requirements set out in VDI 2465 part 2 or NIOSH 5040. Here 4 x 25 mm diameter quartz-fibre filters loaded with DEP, EC in the range 10 – 200 µg, will be supplied alongside 3 x blank quartz-fibre filters.