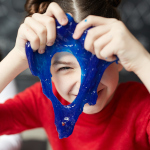 Slime recently slid into the news for all the wrong reasons. Several brands of the toy that mimics the gelatinous goo it’s named for – albeit in rather brighter colours – were found in tests by consumer group Which?1 to contain up to four times the legal levels of boron. Boron, which contributes to slime’s sticky consistency2, is a dynamic trace element sometimes taken as a medical supplement. However, excessive exposure can cause tremors, irritation, diarrhoea, cramps and vomiting, and long-term may harm unborn children or in extreme cases affect fertility3.

Ensuring the safety of products aimed at children, some of the most vulnerable members of society, is vital, and breaches of the safety limit that might allow for these side effects obviously unacceptable. Yet in 8 of 11 samples tested by Which?, boron levels were higher than the 300mg/kg permitted by the EU – with one offender, ‘Jupiter Juice,’ at 1400mg/kg, almost five times the allowance.

Although children’s craft supply staple Baker Ross made the list at 930mg/kg, all the other safety-breaching products were sold by obscure online-only brands, and no slime tested from a high street toyshop was at fault.

Buying your children’s playthings from a household name is no guarantee of safety though; even big corporations aren’t immune to toy safety scandals. McDonalds in 2016 recalled 32 million ‘Step-iT’ activity wristbands given away in Happy Meals across North America, after more than 70 reports of skin irritation, blistering and burns4. As for 2007, in a notorious year for toy safety issues Mattel’s 19-million-toy recall stood out in a packed field. A combination of lead paint used on toy cars5 and small loose magnets – which can rupture and cut off blood supply to organs if swallowed6 – in Barbie and other toys prompted the largest recall in the market leader’s history7.

We’ve come a long way from previous centuries’ toy safety awareness: it would be hard to find a modern equivalent to the 1843 kerosene-powered Model Dockyard Locomotive8, which dribbled flammable liquid in its wake, or the Atomic Energy Lab playsets of the 1950s9, which came bundled with samples of uranium and radium for the little darlings.

Despite being ostensibly safer, there remain many potential dangers and invisible threats in modern toy manufacture, as we can see from slime’s example. This is why at LGC we offer a stringent UKAS-accredited toy proficiency testing scheme that covers a broad set of chemical analytes, including boron and lead, as well as physical testing and paper exercises to check adherence to current European and American toy safety standards. Join the LGC TOYTEST scheme to ensure peace of mind through accurate measurement: explore the range in full here and order online or contact one of our sales teams.