The SARS-CoV-2 Variants of Concern 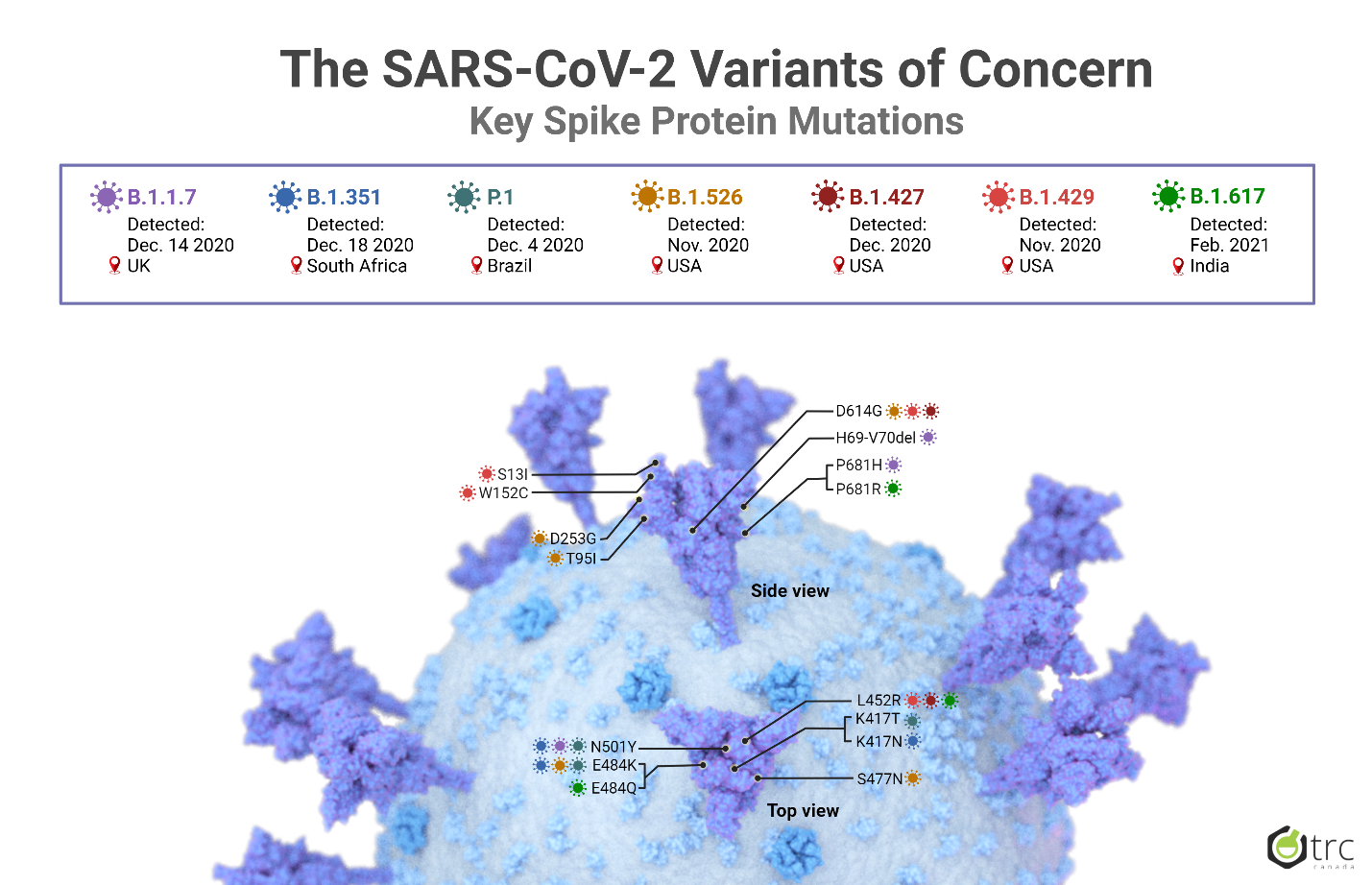 Since the first signs of SARS-CoV-2 in 2019, numerous variants have been reported, based on mutations in the virus's structural and nonstructural genomic parts. We now know that, out of several possibilities, the functionally important mutations are mainly associated with the spike protein gene. The spike protein gene is well documented as the immunogenic part of the virus, and any immunity developed against this protein further protects individuals from contracting the disease. Therefore, any mutation in the spike can lead to the emergence of a new lineage or variant.

So far, six of these virus variants have been detected in various geographical parts of the world – B.1.1.7, P.1, B.1.427, B.1.351, B.1.429 and B.1.526 – based on heterogeneity in spike protein structure, which makes them genetically different from each other. This difference impacts the viral attachment ability of the host cell receptor with its antibody, further neutralising the response to infection and vaccination. Apart from this, it also affects virus transmissibility, treatment efficacy and diagnosis. Point mutation, recombination, and selective pressure have contributed to the emergence of these variants faster than expected.

In the following each variant is described, attributing spike glycoprotein substitution:

This variant was first reported in the UK with multiple sense mutations in the spike protein: A570D, D614G, D1118H, H69del, N501Y, E484K, P681H, S982A, V70del and Y144del. These substitutions in spike protein increase the virus' transmissibility, resulting in widespread infection among humans. In addition, substitution in the N501Y domain of the receptor-binding domain (RBD) results in higher binding affinity of the virus with ACE-2 receptors and increased cell entry into the host. Meanwhile, deletion of six nucleotides in the S gene of the variant causes the loss of amino acids at positions 69 and 70 in the N-terminal domain (NTD), which has been described to cause S gene dropout in commercial assays. This was linked to an increase in diagnostic PCR testing failures.

A recent study reported a 50% enhanced  transmission of this strain compared to previous variants, resulting in a higher death ratio among the infected. Overall, 23 mutations are detected in this variant, of which eight belong to the spike protein. These substitutions make viral attachment to the receptor stronger, thus resulting in higher cell permeability. Studies on immune evasion due to a mutation in spike protein suggested no significant alteration in antibody neutralizing ability against this variant.

Unlike B.1.1.7, B.1.351 does not show deletion of amino acids at positions 69 and 70, but does evince significant mutation in RBDs at N501Y, E484K and K417N, while L242, L244 and R2461 substitutions reside in the NTD. Like the UK variant, this mutated variant also has a 50% increased transmission rate among susceptible hosts, and, more concerningly, B.1.351 is ten times more resistant to antibody neutralisation through vaccine sera or convalescent plasma, threatening the efficacy of vaccination programmes.

This variant was first traced in Brazil with specific mutations in the spike glycoprotein - D138Y, D427N, D614G, E484K, H655Y, K417T, L18F, N501Y, P26S, R190S and T20N. K417T, N501Y and E484K are the most critical substitutions in spike glycoprotein receptor binding domains specific to this variant. The resultant mutation confers various functions on the virus previously unknown to the wild type virus: epidemiological data indicates a severity of infection in young people that is unlike the other variants.

There is substantial evidence that the mutational changes in NTD and RBD of the P.1 spike protein enable this variant to evade immune response caused by previous natural infection and vaccine protection. The main substitutions in this variant are E484K and K417T, which can lead to vaccine failure and the possibility of re-infection becoming more viable.

This variant of SARS CoV-2 was first detected in New York at the end of 2020 and went on to surpass other prevailing variants in the region. Surprisingly, this virus variant contains spike and non-spike mutations in its genetic structure. It is subdivided phylogenetically into two sub-lineages (E484K and S477N) linked to receptor-binding domains in spike glycoproteins of the variant. Mutation S477N is reported to cause stronger binding with ACE 2 receptors, resulting in increased viral infectivity in the host species. Like other variants of SARS-CoV-2, this variant also presents E484K mutation in the receptor-binding domain, which is involved in the viral escape mechanism from immune response produced due to vaccination or infection by other variants.

Taken together, all the modifications in the B.1.526 spike protein led to a public health emergency and severe lockdown restrictions to try to avoid further spread throughout the US.

Both of these variants emerged in California, USA, and share common spike glycoprotein mutations. The spike protein mutation in B.1.427 in the RBD of the virus includes L452R and D614G. While variant B.1.429 has the same mutation site in the spike glycol-protein domain, it harbours S13I and W152C substitutions instead. In addition, mutation L452R coupling with D614G in RBD of the virus caused increased viral entry into the cell compared to D614G alone.

Both variants evidenced 20% higher transmission rates in susceptible populations in comparison to other variants. This higher transmissibility led to an increased rate of infection in California state, on top of which the RBD and NTD mutations have been shown to amplify immune evasion, significantly reducing or removing the neutralising effect of antibodies and potentially rendering vaccination less effective.

First detected in India, this variant is now generally referred to as the Delta variant, and was responsible for the second deadly wave of COVID-19 in India. Since then, this variant has been reported in 17 countries, with a more prominent growth rate when compared to other variants. This variant comprises several lineages, including B.1.617.1, B.1.617.2, and B.1.617.3.

As explored above, numerous mutations in the spike protein domains, RBD and NTD, resulted in multiple focal variants of concern. Based on this history, it seems likely that more infectious and potentially dangerous variants of concern will continue to emerge as SARS-CoV-2 develops and progresses. Evidence backs this up: one study systematically evaluating all possible future spike protein RBD mutations found that most of them would be likely to make SARS-CoV-2 more infectious, potentially significantly so. To counter these viral mutations, research efforts will continue to investigate ways to mitigate the effects of new SARS CoV-2 variants and develop better preventative options, as has been done in the case of the influenza virus.

At TRC we provide the latest research products and tools (biochemical, kits, stable isotopes and custom synthesis) to support your antiviral research as it continues to progress in this crucial area. Explore our Covid-19 research tools and get in touch with our expert team of chemists for specific needs.