Primed to react: staying on top of allergen testing

Food allergens are a hot topic right now, with legislation passing this week in New York requiring that education system staff undergo proper allergy training, as a result of the death of a three-year-old whose daycare fed him dairy, to which he had a severe allergy. In the UK the highly publicised deaths of two Pret a Manger customers, who had allergic reactions to incompletely labelled Pret products, has spurred new government proposals to overhaul pre-prepared food labelling laws to safeguard allergy sufferers1.

With food allergy prevalence climbing steeply over the last few decades – the CDC reports that between 1997 and 2011 food allergies in children increased by 50% and peanut allergies more than tripled2 – and minor allergens growing in severity, these new laws are only the beginning. Allergic reaction and food allergens are set to be crucial issues across the developed world, in populations that are increasingly reactive.

What is a food allergy?

A food allergy is when the immune system reacts unusually to specific food ingredients, mistakenly treating specific proteins found in food as a threat. Allergic reactions are often mild, but they can also be very serious, ranging from simple symptoms such as itching and a stuffy nose, to vomiting and loss of consciousness. If an allergic reaction is severe, it can trigger anaphylactic shock and be life-threatening.

How common are food allergies?

We all eat products containing allergens; more than 170 foods have been reported to cause allergic reactions, so the presence of allergens in foodstuff is pervasive. However, only some of these are defined as major concerns, which cause most severe reactions, such as difficulty breathing or anaphylactic shock. 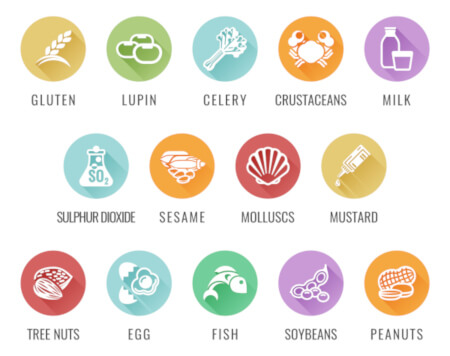 In the EU, there are 14 major allergens, eight of which are considered major allergens in the US as well.  These need to be mentioned (either bold on a label or through provided information such as menus) when they are used as ingredients in a food product. The EU Food Information Regulation (2014)3 introduced a requirement that food businesses must provide information about the ingredients used and allergens in any food they sell. Interestingly, key allergens vary by country or region: in continental Europe the most common allergens are fruit and vegetables, in Scandinavia fish and shellfish, and in Anglo-Saxon countries peanuts, walnuts and hazelnuts4.

The incidence of food allergy changes with age. In infants, up to 10% of the population may have an allergy. This proportion generally decreases throughout childhood, with 4%-6% of children under five still affected, 2%-4% of teens, and only about 1%-2% of adults5. However, overall incidence in the population is on the rise, and fewer children are outgrowing allergies as they get older. It is estimated that 32 million Americans have food allergies, with 5.6 million of those under 186, and 17 million Europeans, with 3.5 million of those under 257.

When allergy labelling is incorrect, lacking or unclear, the food product has to be withdrawn or recalled to protect consumers.

This is where food allergen testing is required. Proficiency testing (PT) samples of key allergens are vital to ensure that analysis by manufacturers and producers is conducted in an appropriate manner and to a high quality, in order to ensure the safety and peace of mind of millions of allergic consumers.

Our growing range of PT allergen samples currently includes gluten, soy, milk, egg and almonds, five of the major allergens for both the US and the EU. Get in touch with us to find out more about our accredited allergen PT programmes, or read more about them here.

[5] The Epidemiology of Food Allergy in the Global Context, https://www.ncbi.nlm.nih.gov/pmc/articles/PMC6163515/