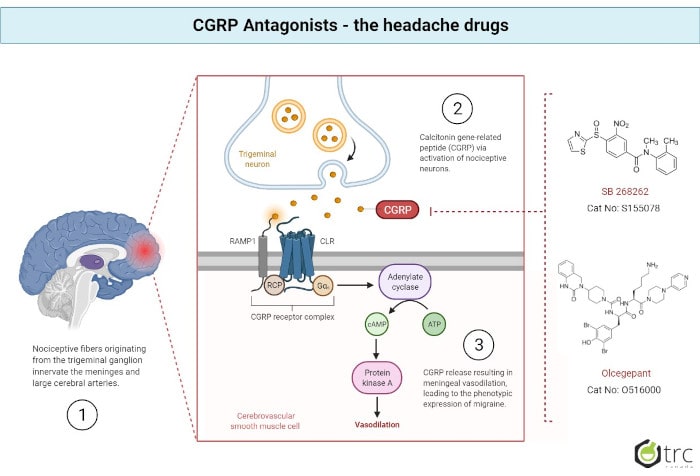 Migraine is a chronic neurological condition that affects around 12% of the total world population. Clinically, it manifests itself as an extreme, incapacitating cerebral pain along with queasiness, regurgitation, and sensitivity to light and sound. It is currently viewed as a neurovascular disorder, since its pathology includes significant associations between the cerebral nerves and veins.

Although the pathophysiology of migraine is complex and based on numerous theories, the primary postulate is that the origin of pain lies in the brain region, which further activates primary brain dysfunctions. This leads to a change in the dilation pattern of meningeal blood vessels, which can cause activation of several inflammatory peptides and trigeminal nerves (Figure 1). It is followed by stimulation of nociceptive neurons in the trigeminal neurons, which triggers the release of calcitonin gene-related peptide (CGRP), leading to trigeminovascular pathway activation. The CGRP receptor complex further results in meningeal vasodilation, leading to peripheral sensitisation, a phenotypic expression of migraine.

CGRP-containing neurons are distributed extensively within the central nervous system, and are most activated in critical parts of the brain, such as the cerebellum, amygdala, striatum, and colliculi. The peripheral release causes neurogenic dilation of vessels and activation, while central release causes nerve damage, which can increase pain sensitivity. In migraine, trigeminal nerves are the points from which CGPR is released. Whenever the trigeminal nerve begins to act, CGRP releases in an antidromic way, resulting in dilation of the intracranial vessels.

Even though the CGRP pathway plays a dominant part in migraine pathophysiology, it was not until the early 1980s that the correlation of acute migraine attacks with an increased level of CGRP was accorded a significant role. Since the receptors associated with CGRP binding sites were reported to be expressed throughout the brain, multiple components of CGRP transmission were targeted as effective migraine therapies. In humans, CGRP is expressed in two isoforms, α and β, but the latter has not been studied intensively. Its regulation is controlled by presynaptic receptors located on trigeminal neurons and is released during trigeminovascular pathway activation. This release is inhibited by 5HT receptors (5-HT1B and 5-HT1D) and was therefore the target of common antimigraine drugs sumatriptan & zolmitriptan.

After this, numerous reports proved small molecules such as olcegepant to be potent and effective against CGRP response in both experimental and clinical settings. Many more drugs (telcagepant, ubrogepant, MK-3207, BMS-927711) were developed and tested as more potent and selective targets for CGRP. This was followed by the development of CGRP receptor antibodies as a novel approach to blocking the target receptor. A timeline showing the major events in the development of drugs that target CGRP is shown below:

In conclusion, although extensive advances have been made, the pathophysiology of migraine is not well understood. But, considering the documented research, CGRP has been well proven as the key to understanding migraine physiology, and CGRP antagonists are emerging as a choice of target for the new era of migraine treatment.

TRC can provide you with a wide range of CGRP antagonists, amylin antagonists, 5HT receptor modulators and many more bioactive compounds to aid your neuroscience research. Search for related products using our comprehensive webshop and get in touch to learn more.