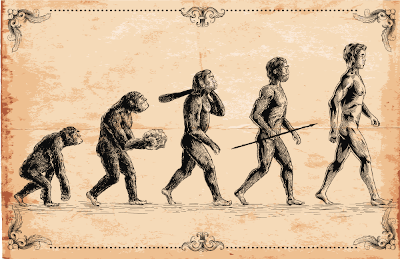 It’s an image seared into the consciousness of just about every schoolkid who has ever glanced through an encyclopaedia – over the course of a dozen or so intermediate forms, a knuckle-dragging ape is gradually transformed into an upright, bare-chested man, who strides confidently towards the edge of frame with all the bravado that his impressive pectorals might suggest.

It’s impossible to deny the cultural impact of Rudolph Zallinger’s The March of Progress. First published in 1965, it went on to become, according to the great Stephen Jay Gould, “the canonical representation of evolution – the one picture immediately grasped and viscerally understood by all.” It has been reproduced and parodied perhaps more than any other scientific illustration, appearing in comic books, movies and textbooks around the world.

It has also, however, been heavily criticised as a depiction of the idea that, as a natural phenomenon, evolution is ‘heading somewhere’, as opposed to simply being the blind, inevitable outcome of genetic mutation and natural selection. This idea, called ‘orthogenetic evolution’, neglects to present the whole picture – Gould himself lamented what he saw as Zallinger’s failure to depict the fact that “life is a copiously branching bush, continually pruned by the grim reaper of extinction, not a ladder of predictable progress.”

Despite its potential inaccuracies, The March of Progress succeeds in one difficult task – igniting a passion for science in the minds of the general population. Who knows how many bright young minds have been inspired by the image to pursue a career in science? This kind of PR is invaluable; whilst the nuances of Darwin’s theory may have been misrepresented, just like Jurassic Park or 2001: A Space Odyssey, Zallinger’s piece has done more than any study to cement evolution’s popular reputation as central to modern biology.

Unfortunately, an artist with the talent of Zallinger, Spielberg, or Ridley Scott is yet to broach the decidedly less glamorous subject of microbial life. Despite their enormous impact on everyday life, bacteria, fungi, and moulds remain about as inspirational to the general public as dishwashing tablets or council tax. Unlike the fascinating but most definitely dead fossils uncovered by the likes of Sam Neil and Laura Dern in Jurassic Park, however, these beasties are very much alive and kicking – a fact demonstrated no less poignantly than by their ability to continuously evade our defences, to devastating effects.

Whilst not quite as attention-grabbing a concept as a self-fertilising T-rex, the development of antibiotic-resistance is a real-world demonstration of evolution by natural selection, and a rapid one at that. Human beings have been at least partially aware of the antibiotic effects of some substances for thousands of years. Accounts of ancient Greek and Indian healers using moulds and other plants to treat infections have been uncovered, whilst ancient Russians would sometimes use a mixture of frog bile and sour milk, a concoction which has proved scientifically relevant in the 21st century. It was not until 1928, however, that the age of antibiotics can be said to have truly started, with the discovery of penicillin by Alexander Fleming.

Whilst its medical uses took some time to be properly uncovered, penicillin rapidly gained a reputation as a wonder drug – by the end of World War II, in excess of 650 billion units of penicillin were being produced by US companies every month. Just twelve years after its discovery, however, a strain of E. coli capable of producing the enzyme penicillinase, and thus fighting the antibiotic, was identified. Since then, antibiotic-resistant strains have popped up at an alarming rate, in some instances evolving in the same year as the release of their corresponding antibiotic. The timeline below outlines a selection of these developments. 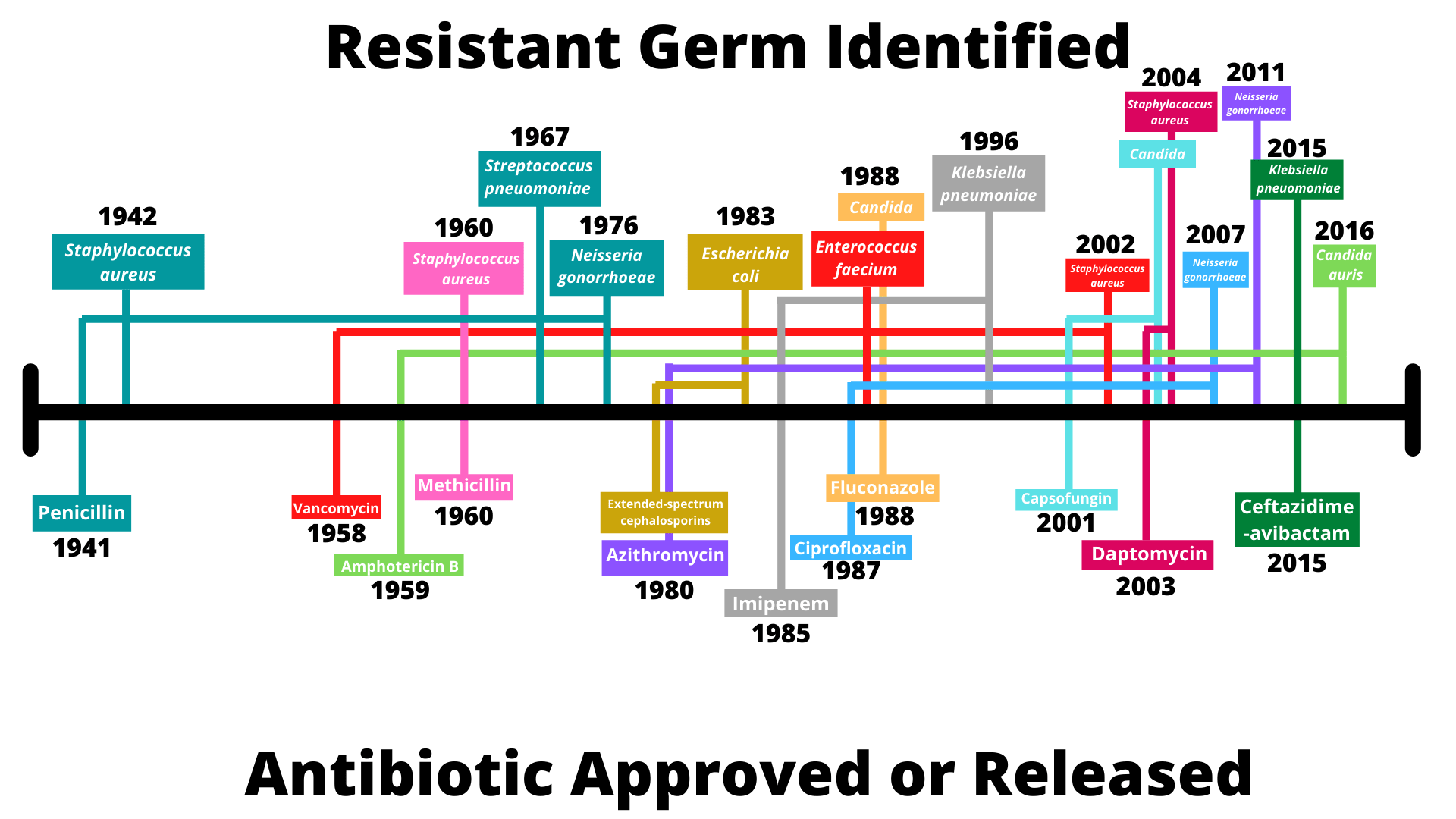 We’re all used to the idea that evolution is a gradual progress that takes thousands or even millions of years, and for organisms like human beings, with a generational gap of anywhere from fourteen to forty years, this is true. But for bacteria, the process is rapidly accelerated, simply by virtue of the speed at which they are capable of reproducing, in some cases doubling in number every ten minutes. (Never mind ‘breeding like rabbits’ – try ‘breeding like Clostridium perfringens.’) This increases the likelihood of a given advantageous mutation occurring, thus accelerating the evolutionary process.

Of course, evolution as a process is also defined by the pressures of natural selection – the harsher the selector, the more rapid the process becomes, at least up to a point. It’s for this reason that organisms like goblin sharks, whose environments – both physical and ecological – have remained largely the same for thousands of years, have themselves hardly changed in that time.

It might be tempting to think of bacteria as wiley foes constructing ever more intricate countermeasures to our pharmaceutical assaults, but the development of antibiotic resistance is more accurately construed as a problem of our own making. By introducing antibiotics into the environment, human beings have provided microbes like E. coli or S. aureus with novel selective pressures, accelerating the spread of advantageous mutations by way of eliminating maladapted organisms. Viewing bacteria as the adversary in this situation is somewhat analogous to viewing the water in a canal that way – after all, it’s only there because we made it flow that way.

The nuances of evolutionary biology, though, do not change the fact that antibiotic resistance poses a major threat worldwide to human and animal health. A growing number of infections including pneumonia, tuberculosis, gonorrhoea, and salmonellosis are becoming harder to treat, and the widespread use of antibiotics in medical and agricultural practices is only accelerating the process. According to the WHO, “without urgent action, we are heading for a post-antibiotic era, in which common infections and minor injuries can once again kill.”

The first step is admitting you have a problem, and antibiotic resistance is not an easy problem to get a handle on, not least because the precise quantity of antimicrobials used around the world is almost impossible to determine.

A 2015 report on antimicrobials in agriculture and the environment by the Review on Antimicrobial Resistance (AMR) found that, in some territories, the use of antimicrobials to treat animals actually exceeded the amount used to treat humans. “The relative use in agriculture, without better policies, is likely to grow even more due to the rise of economic growth, wealth, and with these, food consumption of the emerging world,” the report argued, predicting that animal consumption of microbials between 2010 and 2030 will have doubled in the major emerging meat-producing economies of Brazil, Russia, India, China, and South Africa. 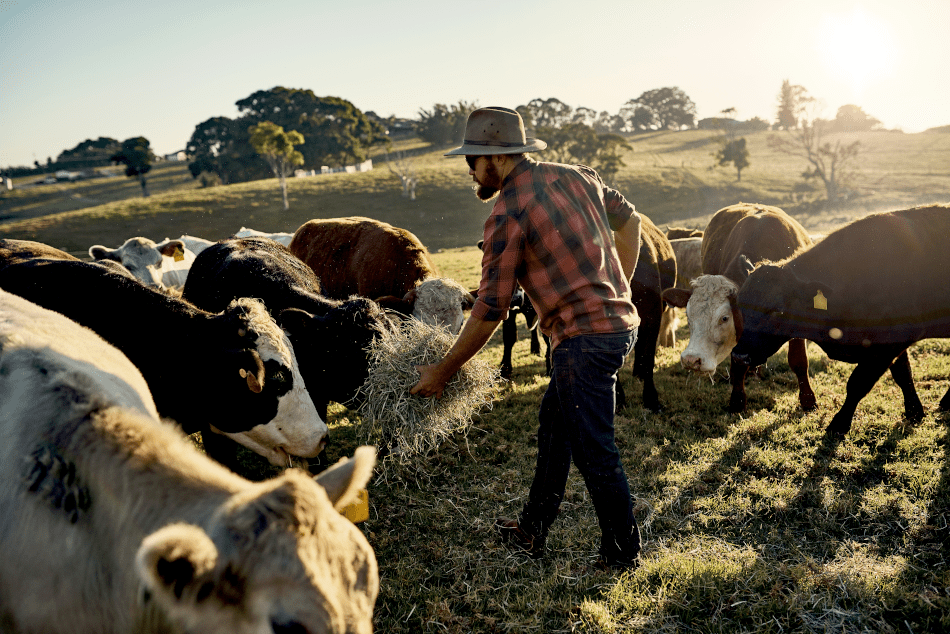 There are, undeniably, many instances of medically justifiable antibiotic use in livestock. Unfortunately, in many countries, animal agriculture is characterised by the administering of subtherapeutic doses of antibiotics to animals in a bid to boost feed efficiency and accelerate growth. A 2004 report by the Union of Concerned Scientists estimated that nontherapeutic use of antimicrobials in livestock accounted for an astonishing 70 percent of total antimicrobial use, a figure that rose to 84 percent when all agricultural uses were included.

The risks associated with this are threefold. Firstly, human lives, especially those of farmers, are endangered by direct contact with animals, which could lead to the transmission of drug-resistant strains. Secondly, these strains can also be passed on via the food chain, when humans prepare or consume meat from animals affected. And thirdly, there is a wider environmental risk as a result of animal excretion – resistant bacteria, as well as significant volumes of consumed antibiotics (70-90%, by some estimates) are excreted by animals, often with most of the active ingredient unmetabolised. This provides further opportunities for exposure to bacteria and taints the environment with antibiotics, providing additional selective pressure and heightening the risk of drug resistance.

In 2019 the EU revised regulations first set up in 2005, limiting the amounts of residual pharmacological substances legally allowable in animal products, with the EPA doing the same in 2007. In order to curb the acceleration of antibiotic resistance and thus save lives, the AMR recommends a three-pronged attack, beginning with the implementation of a global reduction in antibiotic use in food production, particularly those important for human beings.

By reducing the selective pressure on microbials to adapt, the rate at which new resistances might develop would also be reduced. The AMR then recommends that minimum standards be rapidly developed to reduce the introduction of antimicrobial manufacturing waste into the environment.

Thirdly, and perhaps most critically, the report highlights the need for effective surveillance to monitor the spread of antimicrobial resistance. “There remain too many knowledge gaps regarding patterns of antimicrobial use in agriculture and release during manufacturing, and what this means for resistance and, ultimately, human health,” the report notes. “This needs to change if meaningful progress is to be made.”

LGC’s suite of reference standards includes a host of antimicrobials and their derivatives commonly found in the agricultural sector, including ceftiofur, hexetidine, and acetylcysteine, to name but a few.

Take a look at our portfolio of veterinary compounds and their metabolites, and get in touch to find out more about how we can help you in your analytical needs.