Nicotine: Smoking out the truth 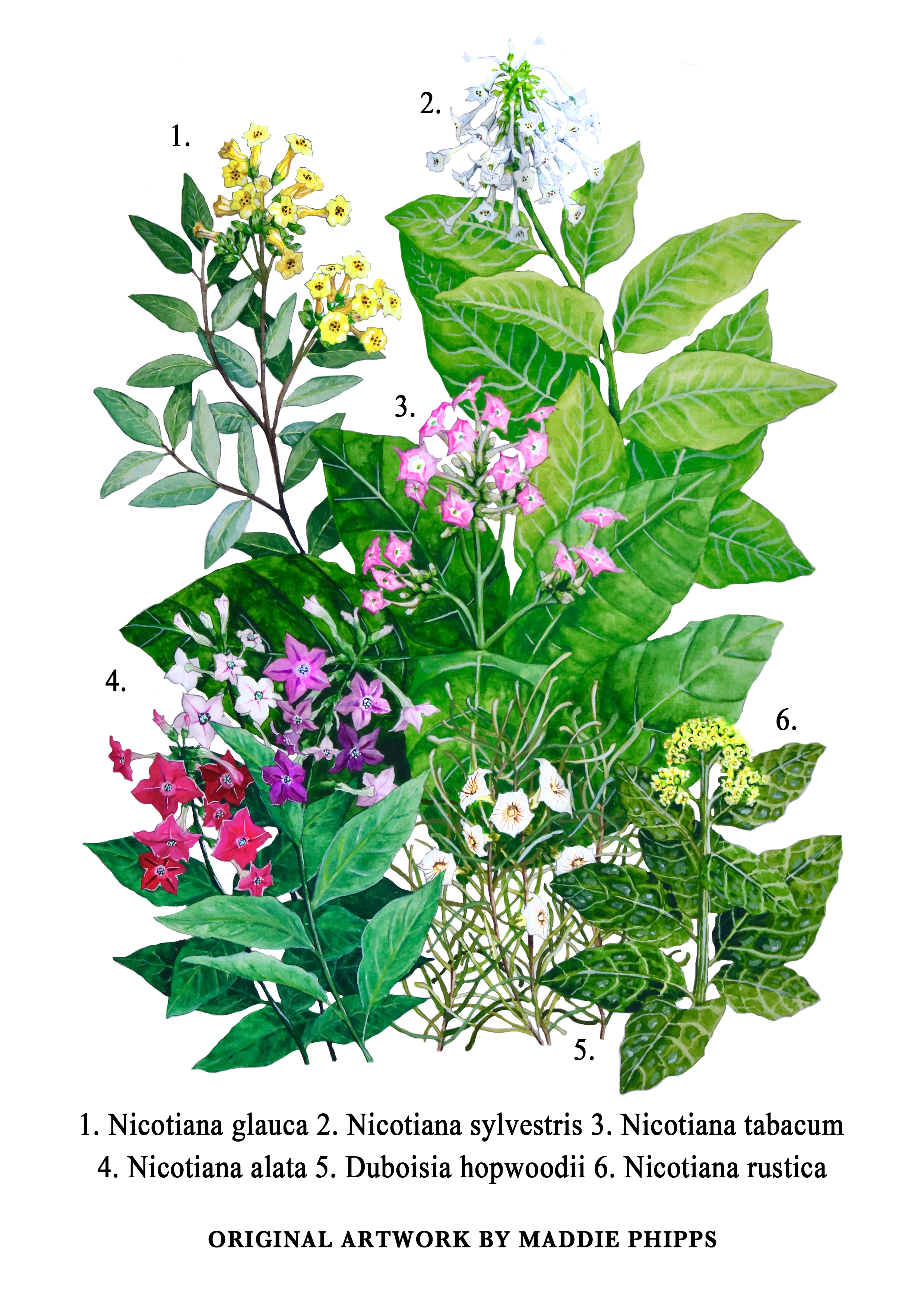 We supply a wide range of nicotine-related impurities and degradation products, as well as our ISO 17034-accredited API. For more information, scroll to the bottom of this article.

Humanity has had a tumultuous history with nicotine, with use of nicotine-rich tobacco for ceremonial and social functions starting as early as 1400 BC, before being introduced to Europe as a medicinal item in the 16th century. In the last hundred years nicotine reached peak popularity, as tobacco use was glamorised through cigarettes, and then equally swiftly fell from favour, as their addictive nature and danger to health became apparent.

But has nicotine been given an unfairly bad rap? More recent research has shown that, outside its association with smoking, nicotine is actually a promising treatment for psychiatric and cognitive disorders, including Alzheimer’s and dementia. It even seems to have a positive impact in the degenerative disease Parkinson’s, and turns out to have minimal side effects outside the lens of tobacco.

Nicotine is an organic compound that occurs naturally in the leaves of plants of the genus Nicotiana, which numbers more than 60 species, generally characterised by tubular flowers and large leaves. Nicotiana species are native to North and South America, Australia, Africa, and the South Pacific, but have also been widely grown in China and India, amongst others.

While commonly all called tobacco plants, it is Nicotiana tabacum that is cultivated worldwide for tobacco and is the principal source of nicotine, with many other species ornamental. Other plants in the genus containing nicotine at a significant level include:

Nicotiana is part of the nightshade family (Solanacceae), so other nightshades may also contain nicotine – Duboisia hopwoodii (pituri) from Australia is one example, leaves from which have been chewed as a stimulant by indigenous Australian communities for centuries. Even potatoes, tomatoes, aubergines and peppers hold very small amounts of nicotine!

As an addictive stimulant, nicotine is the ingredient in tobacco that makes its use pleasurable, but it wasn’t until 1828 that it was isolated from the tobacco plant and recognised as a chemical by German chemists Wilhelm Heinrich Posselt and Karl Ludwig Reimann. Use of nicotine in tobacco, however, began long before that, potentially as early as 1400 BC, with evidence of tobacco cultivation by Mexicans and Native Americans. Tobacco was smoked socially, medicinally and ceremonially, but also used for trade and even as a currency: in colonial Virginia promissory notes payable in tobacco were accepted, and the cost of commodities from goods to wives was given in pounds of tobacco. 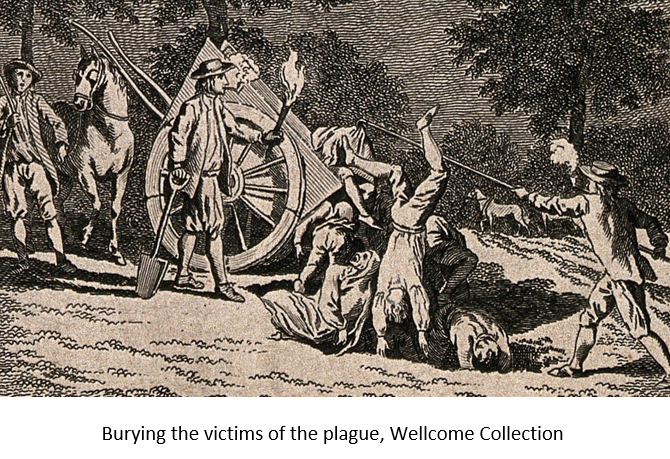 When tobacco was introduced to Europe in 1559, it was promoted as a medicinal treatment; the French ambassador to Portugal, Jean Nicot de Villemain – from whose name we get Nicotiana and nicotine – helped popularise its use in society, sending tobacco and its seeds to the French King in 1560.

Smoking was believed to help prevent people contracting diseases, in particular the plague – this is why those involved with burying the dead during outbreaks smoked clay pipes of tobacco.

This belief persisted for centuries, until concerns about smoking began to grow in the early 20th century, leading to increasing government campaigns encouraging people to quit, and eventually bans on smoking in enclosed places in many countries in the 2000s.

As tobacco’s star waned, nicotine replacement treatments such as patches and gum started to be used as an aid to help people overcome nicotine withdrawal, and e-cigarettes (vapes) were developed, which replace tobacco leaves with nicotine and water vapour. A 2019 clinical trial found that e-cigarettes were almost twice as effective as traditional nicotine replacement treatments in helping smokers to quit, though the Royal College of Physicians has cautioned that ‘there is a need for regulation to reduce direct and indirect adverse effects’ and ensure quality standards for e-cigarettes are in place. 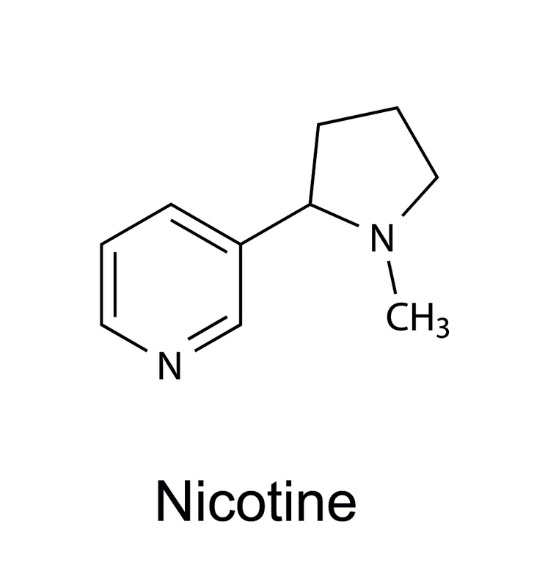 Nicotine is a chiral alkaloid that makes up over 90% of tobacco alkaloid content, constituting 2-8% of the dry mass of tobacco leaves. The nicotine used in medication and e-cigarettes is also sourced from tobacco plants, and the extraction process can produce many potential impurities.

Most alkaloids contain oxygen in their molecular structure, and exist as colourless crystals. Nicotine contains no oxygen atoms, and is one of the few alkaloids that exist in liquid form when pure. It is colourless, but turns brown after exposure to light or air, as the compound is photosensitive and oxidises easily.

Nicotine is a powerful psychoactive neurotoxin that acts both as a stimulant and a sedative and is absorbed and metabolised by the liver. It binds to receptors in the adrenal glands, stimulating an adrenaline release that causes an increase in heart rate, blood pressure and respiration. At the same time, it also activates nicotinic acetylcholine receptors in the brain and appears to cause a release of both dopamine and endogenous opioids, which activate opioid pathways in the neural reward system, producing feelings of pleasure and contributing to its reinforcing effects.

Its pharmacologic and psychodynamic effects make stopping nicotine consumption very difficult, with potential withdrawal symptoms including cravings, anxiety, difficulty focusing, irritability and depression. A 2011 National Institute on Drug Abuse study found evidence that that nicotine consumption made cocaine more addictive in mice, and the American Heart Association has said that nicotine consumed through tobacco is one of the hardest substances to quit – on a par with heroin.

However, more recent research has muddied the waters, with studies showing surprising benefits to nicotine use and a lower likelihood of addiction when used in its pure form, outside tobacco consumption. Dr Paul Newhouse, director of Vanderbilt University's Center for Cognitive Medicine and author of multiple nicotine studies, has asserted that he has not observed nicotine alone to be habit-forming in his research and amongst his patients.

“People won't smoke without nicotine in cigarettes, but they won't take nicotine by itself,” he said. “No one wants to take it because it's not pleasant enough by itself. And it's hard to get animals to self-administer nicotine the way they will with cocaine.”

More significantly, there is increasing evidence that nicotinic receptor function may play a significant role and nicotine may be a therapeutic target in neurodegenerative disorders such as Alzheimer’s and dementia, as well as schizophrenia, Parkinson's disease, anxiety disorders, and attention deficit-hyperactivity disorder (ADHD).

Nicotine has been repeatedly shown to aid cognition by activating nicotinic receptors in the brain, the very receptors that are lost during the progression of Alzheimer’s; this helps explain the counter-intuitive reduced risk of Alzheimer’s in smokers, despite their increased risk of cardiovascular disease, which is strongly correlated with Alzheimer’s incidence.

So what’s the verdict? The jury’s still out on the overall impact of nicotine, particularly for otherwise healthy people, as side effects, though minimal, can include more serious concerns such as increased blood clotting and atherosclerosis, increased blood pressure and a higher risk of stroke. However, current research, though in early stages, shows promising indicators for nicotine as a therapeutic target for those with existing cognitive disorders and decline, and evidence also seems to confirm that nicotine used independently – in e-cigarettes or patches – actually helps reduce rather than encourage addiction to more harmful substances such as tobacco.

The principal impurities of nicotine are myosmine, nornicotine, β-nicotyrine, cotinine, anabasine and anatabine. These impurities are alkaloids and natural by-products that result from the plant’s own metabolism as defence mechanisms against insects. Humans took advantage of this, and until 1970s, anabasine sulphate was a common insecticide in the former Soviet Union. Anabasine is also a primary alkaloid in the species Nicotiana glauca. This plant is native to South America, but Native American groups used the leaves of N.glauca in hunting rituals and as topical medicines.

The similarly named anatabine is common to most plants in the Solanaceae family. The alkaloid has demonstrated inflammatory effects in numerous animal studies, and there are hopes that this will lead to treatment of conditions such as Alzheimer’s disease and multiple sclerosis.

Cotinine is one of the predominant metabolites of nicotine. Cotinine is metabolised much slower than nicotine, with a half-life of 20 hours compared to 2 hours for nicotine. For this reason, cotinine makes a useful biomarker in nicotine testing. Interestingly, smokers of menthol cigarettes retain cotinine in the blood for longer, as the menthol competes with the metabolism of cotinine. Cotinine presents nootropic and antipsychotic qualities in animals, as well as reduction of anxiety, depression and fear-related behaviour; these effects have not yet been reported in humans. 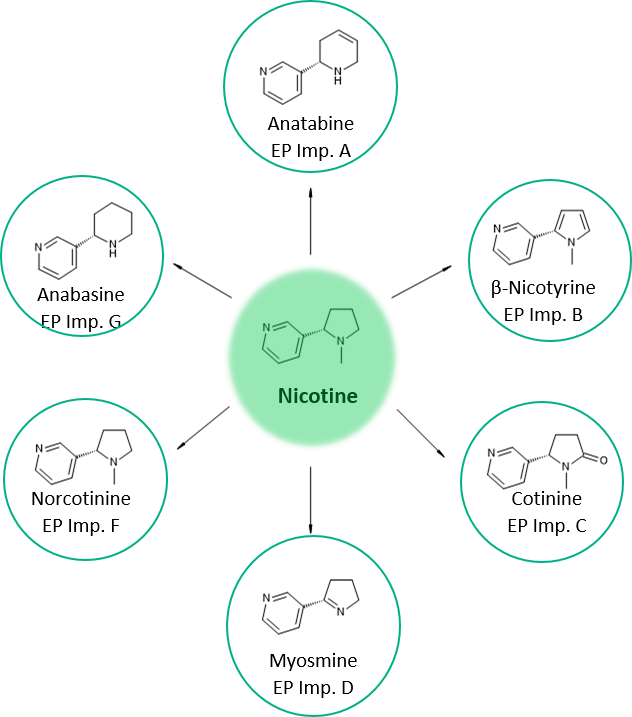 Further degradation of nicotine N’-oxide via ring opening rearrangement causes formation of 1-methyl 3-nicotinylpyrrodiline, 3, and pseudooxynicotine, 4. The latter compound is very similar in structure to a tobacco-specific ketone nitrosamine, NNK, one of the most carcinogenic tobacco nitrosamines. 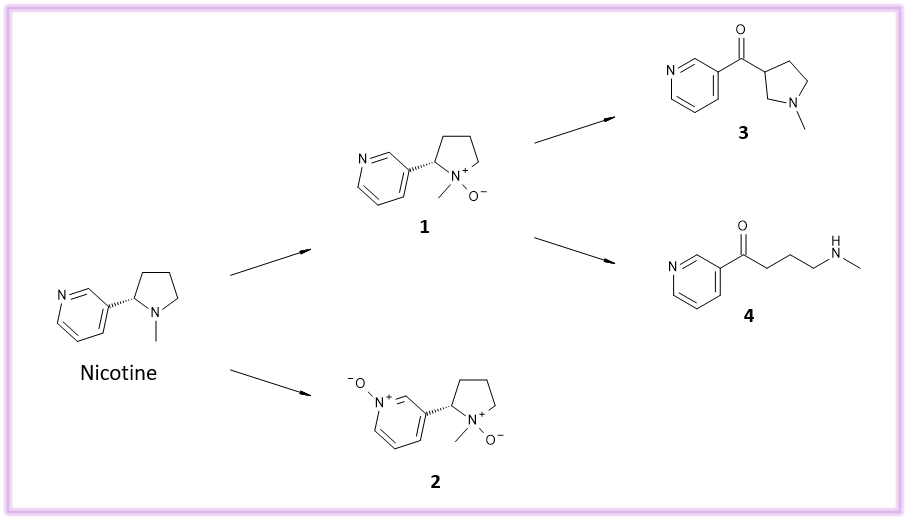 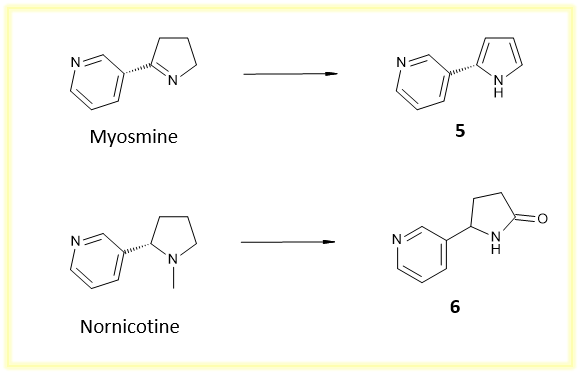