Action against allergens: the global challenge for food testing labs

How can testing laboratories protect both vulnerable consumers and the bottom line from the ever-present threat of common food allergens, such as milk, soya and gluten? And what steps should analytical scientists take to comply with today’s demanding allergen testing and labelling regulations? To celebrate the launch of LGC AXIO Proficiency Testing’s new range of food allergen samples, we investigate the current medical, regulatory and business context for food safety laboratories.

Three years ago, the US Food and Drug Administration analysed 52 dark chocolate bars claiming to be “dairy-free or similar” – and found that four contained enough milk to cause a severe allergic reaction.

The tests backed up another FDA study from five years previously, which detected that one in six so-called ‘vegan’, ‘dairy-’ or ‘lactose-free’ dark chocolate products tested contained between 1,100 and 3,200 of milk/kg (or ppm). Considering that Lowest Observed Adverse Effect Levels have been reported for milk as 187mg of milk protein (for adults) and 362mg (for children), such products may pose a risk to susceptible individuals. The FDA also says that, in the US, milk was responsible for more than a third of all food product recalls caused by undeclared allergens between 2010 and 2020. Moreover, according to Food Safety Magazine, undeclared milk, gluten and soy were together responsible for more than a quarter of all US food recalls in 2018. Lastly, if we fast forward to July 2021 - when the UK Food Standards Agency issued four recall notices in seven days for products containing either unlabelled soy, milk, or gluten – it becomes clear that the global food industry faces a substantial ongoing challenge with food allergens.

What’s more, the challenge is a triple one – because food allergens put at risk the wellbeing and even the lives of susceptible consumers, while costly allergen-related recalls threaten both brand reputations and profit margins.

In terms of consumers who are potentially vulnerable to unlabelled food allergens, the figures are sobering. Some 32 million US citizens and up to 26 million Europeans are thought to have food allergies. An estimated seven million Europeans and three million Americans have coeliac disease- an autoimmune disorder where eating gluten causes the body’s immune system to attack its own tissues. Meanwhile, around six million Americans are estimated to have an allergy to milk, and just under two million are allergic to soy. Fortunately, most instances of exposure result in mild symptoms, but the failure to identify an allergen can also make consumers very ill, and in worst case scenarios cause death.

This threat to human health is why governing bodies in the developed world have introduced strict labelling instructions for the most common food allergens. In the EU, all pre-packaged foods need to display nutrition information- and when a food product contains any of the 14 allergens that need to be declared by law, these must be included and emphasised in the list of ingredients. The FDA, meanwhile, is planning to add sesame to the ‘big eight’ major food allergens that must currently be listed on US food packaging. 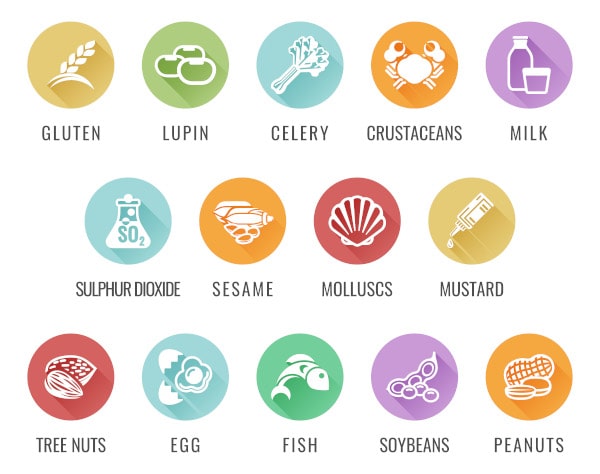 But, as well as their safety and regulatory responsibilities, analytical scientists involved in food safety testing also need to be aware of the devastating financial effects that allergen-related food recalls can have on the firms they support. Even “lowball” estimates of the overall costs of recalls to the food industry put them at about $10 billion per year, with allergens now established as one of the three main reasons why products are recalled. Almost ten years ago, each product recall was estimated to lose companies an average of £10 million in direct and indirect costs, although many have reported being involved in individual recalls that cost anything between $30 million and more than $100 million. Bill Marler, the leading food safety advocate and lawyer who has personally recovered millions in damages for people affected by food safety failures, has also called for food firms to “fulfil their corporate responsibility” by covering victims’ medical bills and lost wages. To look at the problem of recalls from a positive perspective, however, cutting food recalls by half could give the world food industry at least $5 billion more in the bank each year, enhance brand reputations, and add power to generate growth.

Given the risks, regulations and potential rewards associated with food allergens, it’s vital to have confidence in the composition and labelling of our products. And, because of the ever-increasing vigilance around food safety, it is more important than ever that laboratories scrutinise and assess their own performance. Methods of analysis for allergens in food fit into three broad categories - physiochemical, PCR and immunological - while most commercially available kits for routine food allergen analysis rely on immunological methods, such as ELISA and dipsticks. However, as the number of combinations of possible matrices and allergens is so large, no single analytical method will fit all purposes. Proficiency testing programmes are therefore an excellent way to check that the method chosen for food allergen testing is fit for purpose and properly implemented in the laboratory.

For 40 years, AXIO Proficiency Testing has been a trusted partner for laboratories working to keep food safe for everyone. By participating in our proficiency testing schemes regularly, you can have confidence in the measurement of your results.

We move with the world’s changing demands, which is why we’ve expanded our Quality in Food Chemistry Scheme (QFCS) and launched a new food labelling sample (PT-FC-846) to verify that your labelling – including declaration of nutritional values, ingredients, allergens or health claims - conforms to European Union food law or equivalent.

For many years, AXIO has offered a range of proficiency testing solutions to laboratories that analyse food allergens. So we are also delighted to announce that we have four new additions to our portfolio, including: Gluten in pasta sauce (PT-FC-851), Soya and milk protein in non-dairy milk (PT-FC-853), Gluten, egg white and milk protein in biscuits (PT-FC-854), and Gluten in swabs (PT-FC-855).

LGC. Science for a safer world.