In the four-and-a-half decades since they were first discovered, our knowledge about chemokines and the role they play in disease has become well advanced. Because of the role chemokines and their receptors play in many aspects of cancer biology, they are now considered a key target in the development of many state-of-the-art cancer therapeutics. Against a background of tumour resistance to many existing treatments and continued poor survival rates for some prominent cancers, the precise role that chemokines play in the immune system is poised to become one of the main avenues for future cancer drug discovery.

Chemokines and their receptors play a complex role in both fighting and enabling cancer. Some – such as CXCL9 and CXCL10 – are associated with antitumoural responses, given that they recruit natural killer cells and other cytotoxic lymphocytes. In breast cancer, chemokines CXCL9, CXCL10, and CCL16 can inhibit malignant cell growth, whilst some – including CCL2, CCL5, CXCL8 and CXCL12 become “helpers”. As Mollica Poeta et al. point out, “Inflammation is an essential component of the tumor microenvironment and one of the hallmarks of cancer.” As chemotactic cytokines, chemokines are both important mediators of cancer-related inflammation and a target for oncogenic pathways. Their cognate receptors, moreover, are expressed by cancer as well as stromal cells, whilst their altered expression in malignancies “dictates leukocyte recruitment and activation, angiogenesis, cancer cell proliferation, and metastasis in all the stages of the disease.” Inhibiting the pro-tumour activities of chemokines and their receptors is therefore a major priority in immunotherapy research.

Thankfully, some key targets have already been identified. CXCR4 is highly expressed in a variety of human cancers – including breast cancer and pancreatic ductal adenocarcinoma (PDAC). It is known to bind to CXC12 to cause proliferation, migration, and angiogenesis in PDAC, and does not respond satisfactorily to immune checkpoint inhibitor therapies. In breast cancer, CXCR4’s positive expression rate is as high as 60 per cent, and it is also involved in lung metastasis. Drugs targeting CXCR4 may, therefore, prove highly beneficial for breast cancer sufferers and can also build on the success of existing chemokine receptor inhibitors. For example, inhibition of CXCL13 expression has resulted in significant decrease of IL-1, TNF-α and TGF-ß1, as well as lower cell proliferation and increased apoptosis. Inhibiting CCR1, meanwhile, has resulted in reduced cancer growth and metastatisation in murine models, mainly through targeting myeloid cells. For example, the CCR1 antagonist CCX721 reduced multiple myeloma tumour growth and osteolysis targeting osteoclasts and their precursors, while BL5923 inhibited colon cancer liver metastasis by limiting immature myeloid cell recruitment. The fact that large numbers of chemokines have been found in breast cancer could even be considered helpful when set in a research context, simply because it provides more choices for targeted therapy. Inhibiting CXC5 may be a potential avenue for treating advanced breast cancer, for example, while high levels of CCL2 and CCR2 could also be used as biomarkers, enabling its early diagnosis. 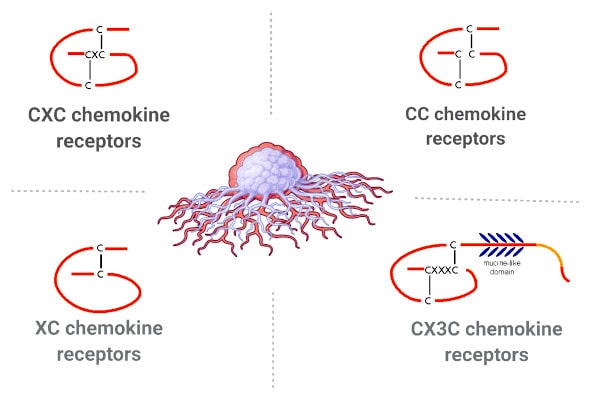 Another potentially fruitful – and comparatively unexplored - area of research is atypical chemokine receptors (ACKRs). This four members of this family – ACKR1/DARC, ACKR2/D6, ACKR3/CXCR7 and ACKR4/CCRL1 – have also emerged as important regulators of immune regulatory responses and could therefore represent “plausible” targets for drug discovery. Mollica Poeta et. al also argue that their importance to cancer biology could make them a potential target for innovative immunotherapies. “(AKCRs) are emerging as crucial regulatory components of the chemokine network in a wide range of homeostatic and pathological conditions”, they state, after reviewing evidence that AKCRs can both promote and limit tumour progression and metastasis.

Chemokines and their receptors may present an “ideal target” for drug discovery, but their complexity and our still limited understanding of them also means that they are “likely to remain prominent in the scientific literature for years to come.” In their review of previous research, Mollica Poeta et. al call for an improved understanding of their roles in different malignancies, in order to avoid potential side effects. For example, “in hematological malignancies, targeting of overexpressed chemokine receptors directly kill(s) tumor cells but can potentially induce unwanted immune reactions (e.g., CCR4).” Nevertheless, when used in combination with chemotherapy or with antibodies against immune checkpoints, chemokine receptor inhibitors are already yielding encouraging results in solid tumours. Mollica Poeta et. al predict that, in future, they could be used to modulate the stromal component of cancers, overcome chemotherapy resistance, and maximise patient immune responses.

TRC has more than 40 years’ experience working through some of the most complex synthetic pathways to deliver you high quality research chemicals. Our world-leading chemists engineer specific solutions for customers, and we have a wide range of GPCR receptor modulators, agonists, and antagonists to support your new and novel anticancer research.

See below for a selection of these -  or get in touch to learn more.