How US cannabis testing laboratories can thrive, despite lab shopping

Lab shopping and potency inflation have made the Summer of 2022 a turbulent time for US cannabis testing laboratories.

CannaSafe, a leading California testing company founded in 2011, announced in June that it was closing because of lab shopping – saying the practice “makes it very difficult for labs with integrity to get on the playing field.”

The following month, three Arkansas customers in chronic pain sued the testing company Steep Hill Inc. and two co-defendants, alleging that they had fraudulently overstated the amount of tetrahydrocannabinol (THC) in medical marijuana by an average of 25 per cent.

The two events shook confidence in the US cannabis industry – one expert arguing that, if proven, the Steep Hill allegations alone “could erase hundreds of millions of dollars in cannabis laboratory investment nationally.”

The chief science officer of CannaSafe meanwhile warned that its difficulties were “just a preview of what is coming for other… labs”, and that unless action was taken against unscrupulous testing companies, “most existing cannabis labs will not make it.”

The legalisation of recreational cannabis has caused demand for high-potency products to increase dramatically in recent years – with buyers and dispensaries reportedly rejecting those whose Certificates of Analysis (COAs) give a THC level of below 20%.

According to InfiniteCAL laboratory co-founder Josh Swider, this means that “Sadly, many producers submit valid, certified COAs to the (Department of Cannabis Control), which show two to three times the actual potency value.

“Basically, what’s happening is growers are contacting labs and asking, ‘I get 30% THC at this lab; what can you do?’

“When they see our COA reporting their flower tested lower than anticipated, they will go to another lab to get higher test results.

“Unfortunately, there are all too many labs that are willing to comply.”

The cannabis website Leafly goes further, writing that shopping around labs for the highest THC scores is “almost a mandatory business practice for growers and distributors”, and that lab shopping “remains the original sin of the lab industry.” It also cites an Oregon auditor’s report which found that “industry pressures may affect lab practices and the accuracy of results” in the state – borne out by the fact that, in one 18-month period, 43% of processors used three or more labs, 38 growers and processors five or more, and one processor used nine separate labs.

According to Swider, “inflating potency numbers isn’t the most nefarious testing fraud happening in the cannabis industry”. Instead, it’s analytical labs ‘passing’ cannabis products that are contaminated with pesticides and other dangerous contaminants, such as mycotoxins and heavy metals.

“If a manufacturer has 1000 liters of cannabis oil fail pesticide testing, they could lose millions of dollars – or have it retested by a less scrupulous lab,” Swider writes.

“As the industry continues to expand and new labs pop up left and right, cultivators and manufacturers have learned which labs are ‘easy graders’ and which ones aren’t.

“Certain labs can miss up to ten times the action level of a pesticide and still report it as non-detectable… these companies aren’t just tricking the consumer; they are potentially harming them.”

To Swider and Zachary Eisenberg, of Anresco Laboratories, THC inflation and passing unsafe products on to consumers are part of the same problem, because “Labs that inflate potency are more likely to ignore the presence of contaminants.”

Two years before CannaSafe closed, its president Antonio Frazier warned that lab shopping created a “race to the bottom with safety”.

Leafly, meanwhile, found evidence that growers and distributors are not just demanding high THC scores, but also “shopping for passing grades for pesticides”.

It notes that, when California introduced stricter standards for pesticide residues in cannabis products at the start of January 2019, 20% of batches failed. However, just six months later, only 5-6 per cent of batches were being rejected. It quoted one laboratory chief scientific officer as saying that normal pesticide fail rates should be around 9-10 per cent, and that “Either California growers have really cleaned up their act, or they’re finding a way to pass dirty product.” 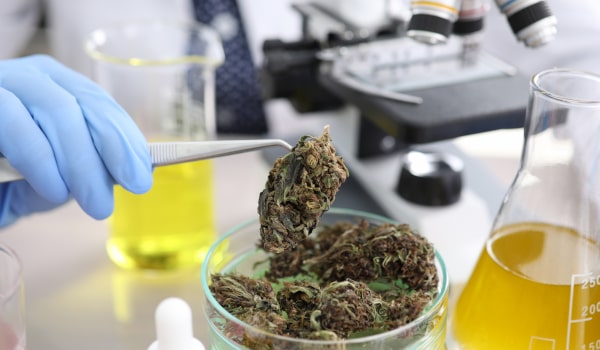 Given that both shopping for high THC levels  and passing grades for pesticides have been condemned for some time within the testing industry, “efforts to standardize and monitor labs have been slow in coming.” However, regulators in the key state of California are now proposing to mandate standardised testing methods by July 2023, in an effort to counter lab shopping and “more effectively regulate the state’s licensed testing laboratories.”

Among the requirements introduced by the new California method are:

·         grinding down cannabis samples to less than one millimetre

She added: “DCC is working to change that so there is greater integrity in the market, accurate information for consumers, and confidence among stakeholders.”

Protecting your laboratory’s reputation – and its future

The DCC’s move to bolster the integrity of cannabis testing and reinforce consumer confidence has a larger goal in mind – ensuring that the cannabis industry is as profitable as possible. With millions already invested in product development and lab set-up costs, growers, producers and testing laboratories all have an interest in ensuring that the value of cannabis products really does reach analysts’ estimates of $40 billion by 2030. Individual laboratories need to consider how being linked to dubious practices reduces their own standing – as well as increasing the risk of de-certification and even litigation, which would all impact their bottom line at this critical juncture for the industry. With so many competitors lowering their standards, now is the time to start investing in and highlighting the quality and reliability of your lab, so it can earn the trust, the custom, and the attention of the industry’s more reputable growers and distributors. This can help drive up product sales and help companies reach those lofty monetary sales goals.