Can we combat Covid with repurposed SSRIs?

With more than 400,000 coronavirus cases still being reported daily around the world, the search for an effective therapeutic for SARS-Cov-2 remains urgent.

Since the start of the pandemic, numerous treatments have been tried to protect Covid sufferers from dying, or requiring serious clinical interventions such as hospitalisation, intubation, and admission to intensive care.

Many involve repurposing existing drugs – notably the controversial antiviral remdesivir, the influenza treatment favipiravir, and the steroid dexamethasone. Lately, however, interest has grown regarding the potential of selective serotonin-reuptake inhibitors (SSRIs) – used all over the globe as antidepressants – to tackle SARS-Cov-2.

Writing in the theoretical journal Medical Hypotheses last year, Egyptian authors Hamed and Hagag proposed using SSRIs “for their reported potential antiviral effect, modulatory effect of respiratory symptoms, antioxidant properties and immunoregulatory effects beside their main action as (an) antidepressant.” Pointing out that most coronavirus deaths were due to pneumonia, Hamed and Hagag speculated that SSRIs might hinder the cytokine storms and increases in tumour necrosis factor alpha (TNF-alpha) responsible for progressing sickness. They advocated further studies into the anti-Covid potential of the popular SSRI, sertraline, on the basis that it was “safe, tolerable, and highly affordable.” 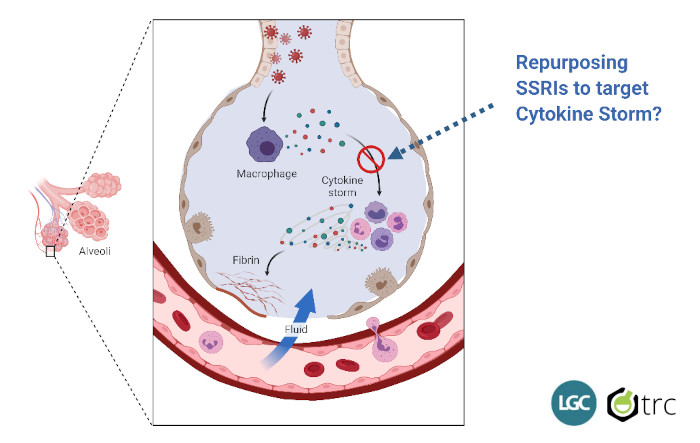 In November last year, a team of US researchers led by Lenze and Mattar also conducted a preliminary clinical trial amongst a small group of Covid sufferers that appeared to support the thesis that SSRIs could help regulate the body’s inflammatory response against coronavirus. Of 152 self-quarantined participants who received either a dose of the anti-OCD SSRI fluvoxamine or a placebo during the 15-day remote study, none out of 80 patients in the fluvoxamine group experienced clinical deterioration. This compared to six out of 72 (or 8.3 per cent) who received a placebo. Of the six who got worse in the placebo group, four participants required hospitalisation for between four and 21 days, while one required mechanical ventilation for 10 days. No patients involved in the study died.

The US authors speculated that fluvoxamine’s ability to interact with the sigma-1 receptor (S1R) protein and reduce the production of inflammatory molecules could explain the better outcomes amongst patients in the SSRI group. They noted that previous studies had demonstrated fluvoxamine’s ability to reduce damaging aspects of the inflammatory response during sepsis through the S1R-IRE1 pathway, as well as decreased shock in animal sepsis models. Other potential explanations that Lenze et al. gave for the apparent efficacy of fluvoxamine against SARS-Cov-2 were (i) direct antiviral effects due to its lysosomotropic properties (ii) modulation of IRE1 effects on autophagy and (iii) inhibition of platelet activation.

A few months after the report on the promising but small US trial, a study of 7230 Covid patients hospitalised in the greater Paris area reinforced the evidence that a range of antidepressants – and not just fluvoxamine or sertraline – could help improve outcomes. Using data from 39 hospitals, including 345 patients who received an antidepressant within 48 hours of admission, this retrospective observational study found that the antidepressant use “was significantly and substantially associated with a reduced risk of intubation and death”. This was, moreover, independent of patient characteristics, clinical and biological markers of disease severity, and other psychotropic medications. The French authors said that the SSRI antidepressants escitalopram, fluoxetine, and paroxetine were particularly associated with the reduced risks, as was the serotonin and norepinephrine reuptake inhibitor (SNRI) venlafaxine.

In seeking to explain the association between SSRI use and better patient outcomes, the Paris group agreed with both Hamed and Hagag and Lenze et. al about the role of antidepressants as S1R agonists that might prevent the cytokine storm observed in severe Covid-19. They also noted how antidepressants were associated with reduced plasma levels of several inflammatory mediators associated with Covid, such as IL-6, IL-10, TNF-alpha and CCL-2, as well as the antiviral effects of antidepressants such as fluoxetine. Finally, they also suggested a link between antidepressants and the inhibition of acid sphingomyelinase activity, which might prevent epithelial cells becoming infected with Covid.

Both the US and French groups, however, emphasized the limitations of their own studies and called for further research into the efficacy of using SSRIs as a treatment for Covid. Lenze et. al characterized their own findings as “hypothesis generating”, whilst the Paris researchers called for double-blind controlled randomized clinical trials of antidepressant medications for COVID-19.

TRC has more than 40 years’ experience working through some of the most complex synthetic pathways to deliver you high quality research chemicals. Our world-leading chemists engineer specific solutions for customers, and we have a wide range of labelled SSRI, intermediate, impurity and metabolite materials to support your new and novel antiviral research.

See below for a selection of these, search for related products using our comprehensive webshop – or get in touch to learn more.