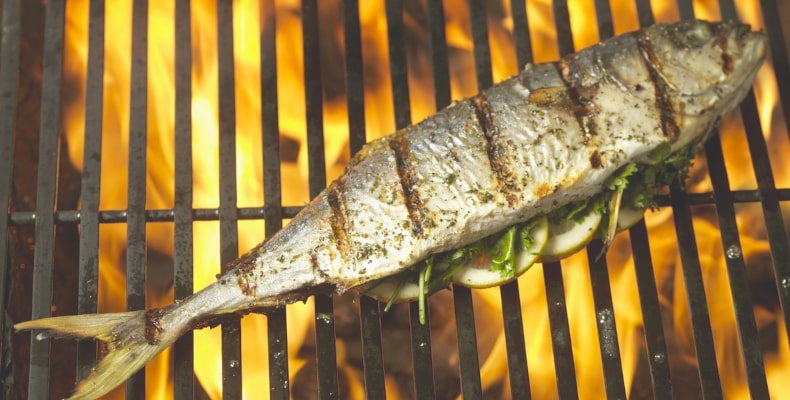 Together, they bring welcome colour and flavour to our everyday lives – but is our devotion to aromatic and heterocyclic aromatic amines dangerous?

Several aromatic amines (AAs) – such as benzidine, 2-naphthylamine, and 4-aminobiphenyl – are central to the manufacture of important industrial products, including dyes, rubbers, pesticides and polymers.

Meanwhile, heterocyclic aromatic amines (HAAs, or HCAs) produced by cooking meat and fish at high temperatures are what gives grilled, fried and barbecued food its distinctive and – for meat and fish eaters – delicious taste.

But both these amine groups are also potentially hazardous, as many AAs have been identified as carcinogens, while HAAs have also been linked with causing stomach, bowel, prostate and rectal cancer.

The carcinogenic properties of AAs became evident in the late 19th century, after the appearance of urinary bladder tumours amongst German workers using aniline in the production of fuschine dye. Aniline, a primary aromatic amine (PAA), was first obtained in 1826 by the destructive distillation of indigo, and is prepared commercially by the catalytic hydrogenation of nitrobenzene, or by the action of ammonia on chlorobenzene. Although widely used as a chemical intermediate in the dye, polymer and rubber industries, aniline is classed by the US Environmental Protection Agency as a probable human carcinogen - while the European Commission (EC) considers it “a non-threshold carcinogen, implying that it may cause cancer at even the slightest level of exposure.” In June 2021, the EC responded to reports that aniline had been found at levels of up to 1200mg/kg in articles for babies by introducing new limits for aniline in toys (30mg/kg) and finger paints (10mg/kg), which it said would “significantly reduce children's exposure to this substance.”

Azo dyes are widely employed in industry because they produce vibrant colours for textiles, leathers, and synthetic fibres cheaply and easily. However, under certain conditions, some azo dyes can decompose to produce more than 20 AAs that are carcinogenic or otherwise harmful to human health. This has led to a European Union (EU) ban on azo dyes that produce more than 30mg of aromatic amines per 1kg of dye being used in textiles or leathers that come into direct and prolonged contact with human skin or the mouth. EU regulations also require that plastic food contact products must not release PAAs into foods above a migration limit of 0.01 mg/kg of food.

The formation of HAAs in foods is the result of a Maillard reaction – also known as pyrolysis, or browning - which occurs when amino acids and reducing sugars are heated together at temperatures of 140°C and above. Although the process has been used since ancient times, the Swedish chemist Erik MP Widmark was one of the first to outline its carcinogenic potential in the early 20th century – demonstrating that fried horse meat extracts induced cancer when applied to mouse skin. Since then, other bacterial assays and animal studies have suggested that burnt, fried, or barbecued meat and fish could be associated with a higher risk of certain cancers in humans – although the connection has not yet been established definitively. However, more than 25 mutagenic HAAs have been identified, with three compounds – PhIP (2-amino-1-methyl-6-phenylimidazo [4,5-b] pyridine), MeIQx (2-amino-3,8-dimethylimidazo [4,5-f] quinoxaline), and 4,8-DiMeIQx (2-amino-3,4,8-trimethylimidazo [4,5-f] quinoxaline) – the most abundant of those formed in meats.

A joint study last year in Japan by the National Institute of Health and Nutrition and the National Cancer Center discussed some of the existing problems involved with proving a clear link between food HAAs and cancer in humans. The researchers found a “statistically significant positive association” between another HAA - MeIQ - and the risk of colorectal adenoma, as well as between individual and total HAAs and the risk of prostate cancer. However, “no association was observed for colorectal or stomach cancer, or for colorectal adenoma among men.” The Japanese team also argued that, despite advances in HAA-related cancer epidemiology over the last 25 years, “findings from epidemiological studies are limited and inconsistent”, and suggested that combining epidemiology with “other methods to assess HAA exposure, such as biomarkers” could prove fruitful. “There is critical need to develop and validate stable and long-term biomarkers of HAA exposure for epidemiological use,” the study concluded. “(For example,) PhIP level in human hair reflects PhIP exposure over a period of weeks to months, and is a promising biomarker.”

TRC has more than 40 years of experience in working through some of the most complex synthetic pathways to deliver high quality research materials. To support your research and analysis, we can offer you a wide range of standards for AAs, HAAs, and their carcinogenic metabolites. Search for products below or get in touch to learn more.