Scientists who developed a new antiparasitical prodrug are confident that it could be a safe and effective treatment for Chagas disease.

Researchers from the University of Georgia (UGA) say the new compound – AN15368 – is 100% effective in curing mice and macaques, with zero side effects.

If AN15368’s promise is confirmed in human clinical trials, it would be the first new medication to target the Trypanosoma cruzi parasite behind Chagas disease successfully since the standard treatment Benznidazole became available in 1971.

“I think it has a really strong chance of being a real solution, not just a stand-in for something that works better than the drugs we currently have."

Writing in Nature Microbiology, the UGA group described how the new benzoxaborole prodrug “is activated by parasite carboxypeptidases to yield a compound that targets the messenger RNA processing pathway in T. cruzi.”

The discovery follows on from previous work that identified benzoxaboroles – a novel class of boron-containing molecules – as having potent activity against human African trypanosomiasis, Visceral Leishmaniasis, and the malarial parasite Plasmodium falciparum.

The fact that AN15368 was “uniformly curative” in non-human primates as well as mice could represent a significant breakthrough – since the macaque results bode well for how it might perform in humans. In past decades, several treatment candidates failed to cure Chagas disease after going straight from initially promising murine studies to human trials.

A new drug without side effects would also be a major advance, since patients taking Benznidazole commonly experience  abdominal pain, rashes, headaches and nausea – causing around one in five to abandon their treatment before it can effect a cure. Rarer, but potentially more severe drawbacks have also been identified - including bone marrow suppression, genotoxicity and embryo-foetal toxicity.

Benznidazole is on the World Health Organisation’s List of Essential Medicines, and was given accelerated approval by the US Food and Drug Administration for use on paediatric patients as recently as 2017. However, the UGA group hopes that AN15368 will prove significantly more effective, and that the new compound’s apparent lack of side-effects will also encourage more patients to complete their treatments.

“(Existing drugs) have variable efficacy, and it's not predictable,” Tarleton said.

"I think most physicians in Latin America have to say (to patients taking Benznidazole), ‘We have a drug. It's going to make you feel bad, and two months later after we finish it, we're not really going to be able to tell you if it worked or not.’

"It's really not a good inducement to take the medication.”

“That really de-risks it by a lot going into humans. It doesn't make it fail-safe, but it moves it much further along." 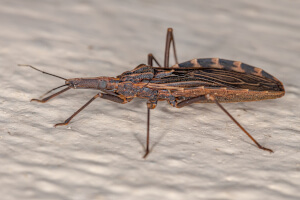 Chagas disease has been described as “one of the most neglected public health problems in the Americas”, where less than one per cent of an estimated six million infected people  have been diagnosed and treated. Symptoms can range from flu-like effects to life-threatening inflammation of the heart muscles or brain, as well as cardiac arrest.

Although it is concentrated in poorer parts of Latin America where T. cruzi parasites thrive in mud, adobe and palm thatch dwellings, increasing emigration is making the condition more of a global problem, with an estimated 300,000 sufferers now living in the US.

Concern is also growing about rising levels of infection and mortality amongst outdoor pets in the US – with Tarleton referencing “areas where the infection rates are 20% to 30% new infections every year”.

The UGA group also hopes to partner with veterinary pharmaceutical companies to produce a treatment for animals – proceeds from which could fund diagnostics and medication purchases in Latin America.