A novel preclinical drug that crosses the blood-brain barrier could provide “a promising landscape” for treating depression, brain injury, and cognitive diseases.

The new compound – called 25-106 – may be the first robust inhibitor of Cdk5, and offers exciting new possibilities for studying the kinase enzyme’s function in wild-type animals. 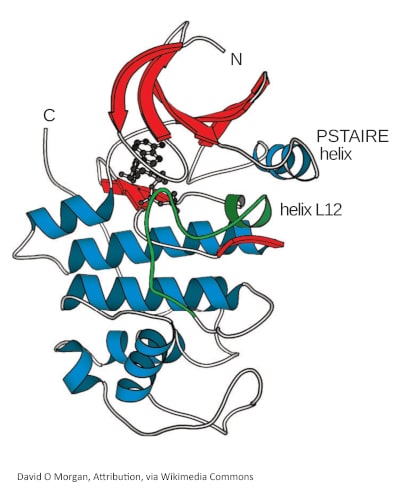 Decades of research into Cdk5 have established its pivotal role in the brain – from developing the Central Nervous System (CNS) to maintaining neuronal architecture, as well as being linked to depression, addiction, and diseases like Alzheimer’s and Parkinson’s.

Anti-Cdk5 drugs may therefore offer important therapeutic benefits and new ways to study brain function, although inhibitors developed to date have largely been unable to permeate the blood-brain barrier that prevents blood solutes non-selectively crossing into the CNS.

Scientists at the University of Alabama say, however, that 25-106 – a novel aminopyrazole-based analogue - is “a uniquely brain-penetrant Cdk5 drug”.

“Altogether”, they write in Frontiers in Pharmacology, “25-106 represents a promising preclinical Cdk5 inhibitor that can be systematically administered with significant potential as a neurological/neuropsychiatric therapeutic.”

The research paper outlines the process leading to the synthesis of 25-106, beginning with benchmarking of the physiochemical properties of five FDA-approved CNS drugs. This led to three analogues (25-143, 25-107, and 25-132) previously reported as Cdk2/5 inhibitors, and the group’s development of 25-106 as a new fourth compound, with an improved predicted brain/blood partition coefficient compared to the other three. Synthesis of 25-106, a trimethoxy aminopyrazole analogue, was achieved in three steps from a commercially-available starting structure (3-amino-5-cyclobutyl-1H-pyrazole 1).

The paper also describes how, following systematic administration, 25-106 inhibited Cdk5 activity in mouse brain slices ex vivo, and also penetrated the brain to inhibit Cdk5 in vivo. In addition, the new compound modulated mouse behaviour by reducing anxiety, in agreement with results that have been noted previously in Cdk5 knockout mice.

Molecular modelling of 25-106 compared to another Cdk5 inhibitor, roscovitine, found that both appeared to occupy the same hydrophobic bonding pocket. However, 25-106 formed two additional bonds within the hinge region of Cdk5’s adenosine 5′-triphosphate binding domain, which might explain its higher activity and more prolonged inhibition of Cdk5.

The authors conclude that “As perhaps the first robust systemic inhibitor, 25-106 represents and exciting and expandable and translatable pharmacological tool to study the function of Cdk5 activity in wild-type animals.

“Achieving systemic applicability may be considered a step forward toward the testing of Cdk5 inhibitors to treat neuropsychiatric and neurodegenerative diseases.

“This provides a promising landscape for future studies to assess the effects of brain-permeable Cdk5 inhibitors to combat stress, anxiety, depression, addiction, cancer, and neurodegeneration.”

They also recommended further study into the degradation and absorption of the new drug, adding: “25-106 remained detectable in the brain 24h after injection but was also well absorbed by peripheral tissues such as the liver and kidney.

“(This) could contribute to off-target effects or toxicity arising from prolonged treatment. Therefore, the development of derivatives of 25-106 with greater brain permeability and tissue specificity is a reasonable goal.”