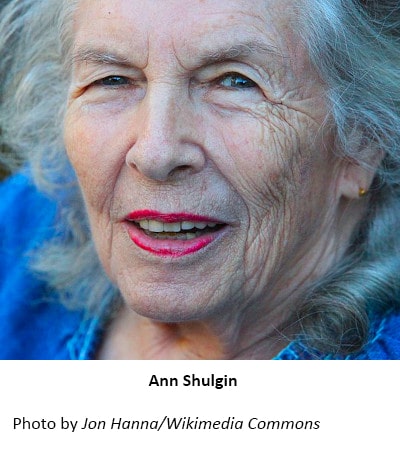 Perhaps psychedelic drug pioneer Ann Shulgin’s most fitting epitaph is that the compounds she championed could play a key role in tomorrow’s cutting-edge psychotherapy.

Shulgin, who has died aged 91, first became interested in the potential of psychedelic substances at the start of the US counterculture movement, in the late 1950s and early 1960s.

During the ’70s and ’80s, she worked with her chemist husband Sasha on creating, documenting and testing hundreds of new compounds from their home laboratory in Lafayette, California.

The couple would first test the drugs on themselves, and then on a select group of volunteers, while Shulgin also incorporated the substances into her work as a self-taught ‘lay therapist’.

She argued that the therapeutic value of using drugs such as MDMA (3,4-Methyl​enedioxy​methamphetamine) was that it enabled people to accept and love themselves, and come to terms with troubling or repressed emotions.

“The magic of MDMA is that it allows you to see who you are without self-rejection,” she said.

“It gives you insight into yourself and is especially good for PTSD (Post Traumatic Stress Disorder).”

Now, after forty years of psychedelic drugs being widely regarded as dangerous or subversive, Shulgin’s ideas about using them to treat conditions including PTSD and depression are gaining mainstream support.

Some of the world’s most prestigious research institutions, including Imperial College and Johns Hopkins University, have opened centres devoted to studying psychedelics amid evidence from small studies that suggests they can be administered safely to patients.

For example, one randomised clinical trial from Johns Hopkins found that 71% of participants with Major Depressive Disorder had a ‘clinically significant’ response to psilocybin-assisted therapy, with 54% going into remission.

Meanwhile, a current trial at King’s College, London, is aimed at “laying the groundwork for MDMA therapy to be offered to the general public in the UK” by demonstrating the drug’s efficacy in treating military veterans with severe and complex PTSD.

The new wave of interest in psychedelics has been part-aided by new technology - such as magnetic resonance imaging and positron emission tomography – that gives scientists greater insight into the drugs’ biological effect on the brain.

Research using the new technologies found that psychedelic compounds such as psilocybin, LSD (lysergic acid diethylamide), and mescaline all acted on receptors for serotonin. Taken in a therapeutic setting, they are said to “activate a therapeutic, dreamlike state, intensifying sensory perception”, similar to Shulgin’s description of the calming effects of MDMA.

But while scientists and sufferers are inspired by the future prospects for using psychedelics to treat a number of psychological conditions, there remain a number of regulatory and scientific questions yet to be addressed.

As Nature points out, most current drugs to treat depression and anxiety can be obtained simply from neighbourhood pharmacies. However, “These new approaches… use a powerful substance in a therapeutic setting under the close watch of a trained psychotherapist, and regulators and treatment providers will need to grapple with how to implement that safely.”

The fact that current clinical trials are performed under “highly circumscribed and controlled conditions” may also make interpreting results difficult, since benefits may result at least in part from a professionally-supervised environment.

Other issues – such as the fact that LSD and psilocybin can cause psychotic reactions and that MDMA, as an amphetamine derivative, could bring with it the risk of abuse – will also need to be considered before any wider rollout of psychedelic-based therapies.

The excitement around the clinical potential of psychedelics is, however, concrete – with 17 trials listed as ongoing in 2020, and the NASDAQ-listed company COMPASS Pathways currently conducting large-scale trials into psilocybin and treatment-resistant depression.

Overall, you sense that Shulgin - who continued to speak and write about her and Sasha’s research legacy until shortly before her death - might have approved.