As we begin 2023, we’re doing so without a familiar face in one of the top jobs in US public health. 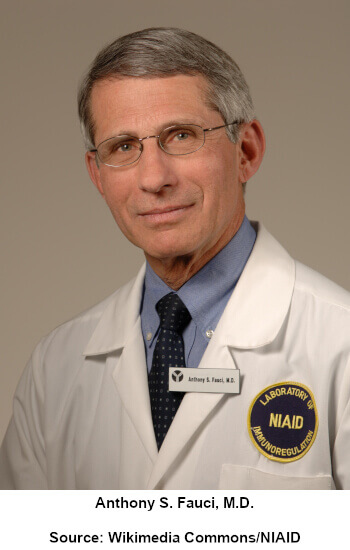 Dr Anthony Fauci, who shot to global fame during the Covid-19 pandemic, stepped down as director of America’s National Institute of Allergy and Infectious Disease (NIAID) at the end of December.

But his 54-year-career as a physician scientist at the Institute – 38 of those years in overall charge – have taught him one key lesson about combating infectious disease: “It’s never over.”

Writing in the New England Journal of Medicine, Fauci warned: “As infectious-disease specialists, we must be perpetually prepared and able to respond to the perpetual challenge.

Fauci first became NIAID director under the Ronald Reagan presidency in 1984, and during his tenure transformed the institute from a relative backwater into what Nature calls “a global role model in infectious-diseases research with a budget exceeding $6 billion a year.”

He has become one of the most highly-cited scientists in history because of his work on HIV immunology – and identifies the ongoing HIV/AIDS pandemic as the first of several devastating infectious diseases which emerged, or re-emerged, while he was NIAID director.

Other strains that had “varying degrees of regional or global impact” on his watch included the avian influenzas H5N1 and H7N9, as well as the H1N1 swine subtype that caused the first pandemic of the 21st century, in 2009.

Fauci also witnessed multiple outbreaks of Ebola, and Zika, as well as severe acute respiratory syndrome caused by the MERS coronavirus. But he identifies Covid-19 as “the loudest wake-up call in more than a century to our vulnerability to outbreaks of emerging infectious diseases.”

Fauci recalls that when he began his career in medicine in the 1960s, researching infectious diseases was a scientific discipline that appeared to have little future.

He writes: “Certain scholars and pundits were opining that with the advent of highly effective vaccines for many childhood diseases and a growing array of antibiotics, the threat of infectious diseases… was fast disappearing.”

But this theory has been proven wrong by subsequent pandemics – leading Fauci to conclude that “Today, there is no reason to believe that the threat of emerging infections will diminish, since their underlying causes are present and most likely increasing.

“The emergence of new infections and the reemergence of old ones are largely the result of human interactions with and encroachment on nature. As human societies expand in a progressively interconnected world and the human–animal interface is perturbed, opportunities are created, often aided by climate changes, for unstable infectious agents to emerge, jump species, and in some cases adapt to spread among humans.

“In addition to the obvious need to continue to improve on our capabilities for dealing with established infectious diseases such as malaria and tuberculosis, among others, it is now clear that emerging infectious diseases are truly a perpetual challenge.

“As one of my favorite pundits, Yogi Berra, once said, ‘It ain’t over till it’s over.’ Clearly, we can now extend that axiom: when it comes to emerging infectious diseases, it’s never over.”

One silver lining that Fauci has identified amid the gloom is that talented doctors are showing “sharply increased interest” in the field of infectious disease studies.

During his decades in post at NIAID, this interest has inspired numerous welcome advances in our ability to treat patients – such as highly adaptable vaccine platforms, including mRNA, and structural biology tools to help design vaccine immunogens.

“Over the years, many subspecialties of medicine have benefited greatly from breathtaking technological advances,” Fauci writes.

“The same can now be said of the field of infectious diseases, particularly with the tools we now have for responding to emerging infectious diseases, such as the rapid and high-throughput sequencing of viral genomes; the development of rapid, highly specific multiplex diagnostics; and the use of structure-based immunogen design combined with novel platforms for vaccines.”

Francis Collins, the former National Institutes of Health director, praised Fauci by saying: “His contributions have saved countless lives from HIV/AIDS, Ebola and SARS-CoV-2, and will stand as profoundly significant gifts to humanity.”