Pharmaceutical Roots is a content series from LGC Mikromol investigating and outlining the natural origins of pharmaceutical substances, and offering a deeper dive into their uses, risks, and mechanisms of action. 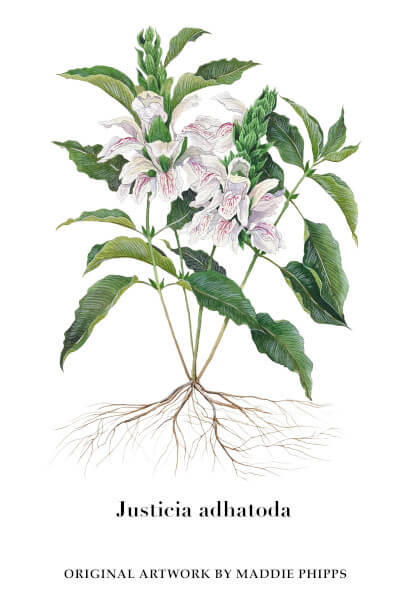 It’s been used for thousands of years in Indian and European medicine and also formed the basis of modern drugs for coughs, colds and respiratory diseases since the 1960s. But the pharmaceutical story of the Justicia Adhatoda plant isn’t over just yet: many of today’s researchers think it may also yield future treatments for some of today’s most virulent diseases, including Parkinson’s, Covid-19, and tuberculosis.

A plant known by many other names – including the Malabar nut, Adhatoda vasica, or simply AV - Justicia adhatoda is a flowering shrub from the Acanthaceae family which grows naturally from Afghanistan to Indo-China, and has also been introduced to Cuba, Ethiopia, Jamaica, Madagascar, and Sicily. Its leaves contain a variety of phytochemicals – most importantly the quinazoline alkaloid vasicine, which for millennia has exhibited potent bronchodilatory, antioxidant and anti-inflammatory properties. The plant’s longevity and usefulness has also been recognised by the World Health Organisation, which included it in its manual The Use of Traditional Medicine in Primary Health Care.

Justicia adhatoda has long been part of traditional Ayurvedic (Indian) and Unani (Arab-European) medicine, with its roots, leaves, flowers, and bark all used in various preparations to treat ailments ranging from coughs to asthma. During the 20th century, scientists began to recognise and study its usefulness, with Vasaka syrup and liquid extract appearing in the Indian Pharmacopoeia in 1955. Four years later, an Indian research study outlined the bronchodilatory activity of the Justicia adhatoda alkaloid vasicinone, while the late 1950s also saw the development of bromhexine – a vasicine-derived drug to clear mucus from the respiratory tract - by the pharmaceutical company Boehringer Ingelheim. Bromhexine, introduced to the market as Bisolvon, came into medical use in 1966 and was followed in the late 1970s by ambroxol, a semi-synthetic bromhexine metabolite to treat respiratory diseases associated with viscid or excessive mucus. Now that the original patent has expired, generic ambroxol products are available from many companies, and ambroxol lozenges for the treatment of sore throats were introduced in 2002.

Justicia adhatoda is a “mainstream natural agent” in its own right - with its leaves, roots and flowers still used to make juices, powders, essential oils and syrups that liquefy sputum and relieve coughs, colds, bronchial catarrh, bronchitis, asthma and even tuberculosis.

Bromhexine, meanwhile, is comprised of a group of compounds with secretolytic activity that decrease the viscosity of mucus in the airway and activate the ciliated epithelium - allowing secretions to be expelled from the respiratory tract, improving breathing and alleviating coughs.

Ambroxol hydrochloride stimulates the secretion of surfactant by type II pneumocytes and reduces mucus adhesion to the bronchial lining. Antioxidant activity observed in the presence of ambroxol includes the suppression of lipid peroxidation, while anti-inflammatory effects are also achieved by the blocking of proinflammatory messenger expression – inhibiting histamine release from mast cells as well as cytokine and interleukin generation. 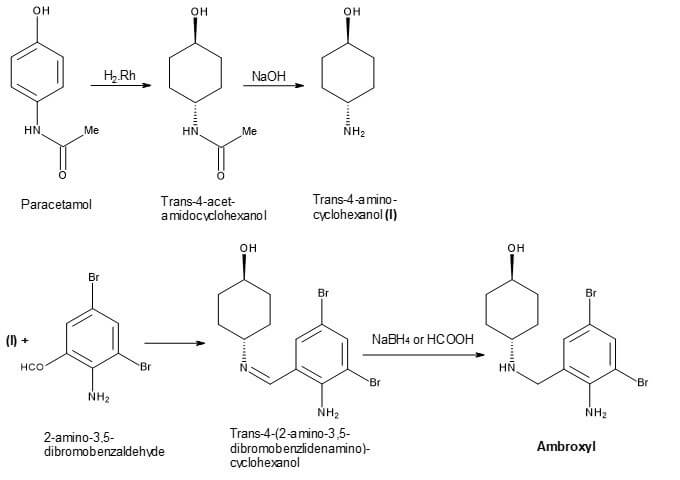 Despite its thousands of years of efficacy in treating a wide range of ailments, a critical review published last year in the International Journal of Green Pharmacy hailed the venerable Justicia adhatoda as “a novel medicinal herb (that) may be used as an important source for the discovery of new and potential drug molecules.”

One of the immediate advantages to repurposing or further researching bromhexine, ambroxol and their parent plant is that they are already known quantities with excellent safety records. As the review points out, Justicia adhatoda “has been used for thousands of years… without any adverse effect” on patients, while an Iranian study suggesting ambroxol as a potential lysosomotropic  and anti-inflammatory therapy for SARS-Cov-2 also noted that it lacks “the serious side effects encountered with other lysosomotropic agents such as chloroquine and hydroxychloroquine.”

As drugbank.com points out, bromhexine and ambroxol have recently “garnered interest for the potential prevention and treatment of COVID-19 due to their interactions with cell receptors in the lungs.” Bromhexine has been shown to inhibit the transmembrane serine protease 2 receptor (TMPRSS2), which plays a crucial part in the development of viral respiratory diseases, including influenza A and Middle East Respiratory Syndrome (MERS). Ambroxol may, meanwhile, act on the angiotensin converting receptor 2 (ACE2) to stop the SARS-Cov-2 spike glycoprotein entering cells, or prevent viral entry through increased surfactant secretion. Finally, a docking-based study from India also identified that vasicoline alkaloids extracted from Justicia adhatoda leaves exhibited very good replicase inhibition activity against Covid, as well as ‘acceptable’ protease inhibition.

The review article also cited a 2013 Egyptian study that demonstrated that Justicia adhatoda extracts had an inhibitory effect on acetylcholinesterase (AChE) enzymes linked to the progression of Alzheimer’s disease. Meanwhile, major Phase III trials into whether ambroxol can become a disease-modifying treatment for Parkinson’s disease are due to conclude in 2024 - based on evidence that the drug increases levels of β-Glucocerebrosidase (GCase) protein enzyme in nerve cells, enabling the cells to remove waste proteins more effectively.

With the world’s most effective vaccine against tuberculosis now more than 100 years old and attempts to develop new treatments stymied by drug resistance, research into medicinal plants such as Justicia adhatoda may offer some hope of a breakthrough. Given that a 2010 study from Agra University found liquid extracts from the plant produced “meaningful” inhibition of two MDR-resistant Mycobacterium tuberculosis strains, further trials now seem overdue.