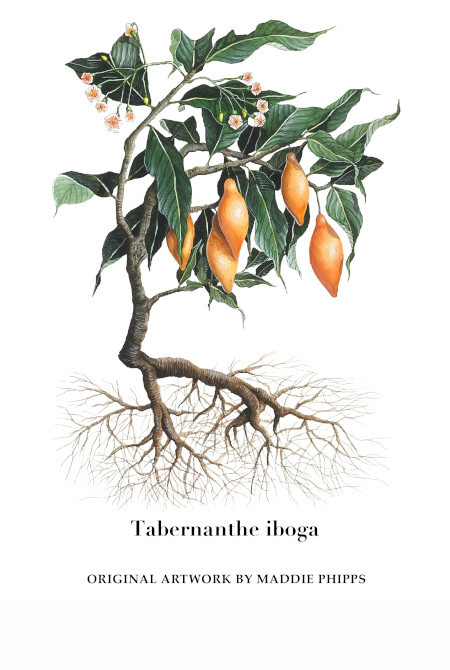 Tabernanthe iboga (iboga) is an indigenous plant in Gabon, the Democratic Republic of the Congo, and the Republic of the Congo. Its root bark contains the psychoactive substance ibogaine, an indole alkaloid that “packs a serious psychedelic wallop” and reportedly acts on the brain “like a hybrid of PCP and LSD”.

Although ibogaine has been illegal in the US since 1967, both anecdotal reports and research studies suggest it is a highly promising candidate as a treatment for addiction. For example, one small, year-long study in New Zealand reported significant success in keeping opioid-dependent participants off drugs. Meanwhile, a programme that treated 51 US combat veterans for trauma-related psychological and cognitive impairment with ibogaine and 5-methoxy-N,N-dimethyltryptamine reported “significant and very large reductions” in a range of symptoms, including depression and post-traumatic stress disorder (PTSD). Some countries, including the UK, Canada, and Mexico, allow ibogaine to be prescribed by clinicians to treat addiction, while there is increasing interest from researchers in developing the compound and its analogues to treat opioid dependence and a range of mental health conditions on a large scale.

Extracts from the iboga shrub have traditionally been used in healing rituals and initiation ceremonies by followers of the Bwiti religion in west Africa. Around the turn of the 20th century, the scientists Dybowski and Landrin observed canoeists and other inhabitants of the French Congo using the plant as a stimulant, noting: “They claim that absorbing a certain quantity of the plant will give renewed strength and make it possible to withstand fatigue for a long time, doing away with any need for sleep”. Dybowski and Landrin became the first to isolate ibogaine in 1901, and before being outlawed in the 1960s, it was sold in France as an antidepressant and stimulant called Lambarene.

During the 1950s, The US Central Intelligence Agency (CIA) reportedly carried out secret research on the effects of the drug – using opioid-dependent people sentenced to mandatory rehabilitation at a hospital in Lexington, Kentucky. The experiments were allegedly part of the CIA’s notorious MK-ULTRA programme that tried to find “a mind control drug that could be weaponised against enemies”.

More peaceable researchers led by former heroin addict Howard Lotsof later launched a series of clinical trials aimed at investigating ibogaine’s ability to cure opioid addiction. Lotsof, who in 1962 had experimented with ibogaine and discovered that it suddenly “wiped out” his addiction, found that seven other heroin addicts also had the same experience after taking ibogaine during ‘lay’ drug trials that he organised. During the 1980s, Lotsof worked with a Belgian company to produce a tablet form of ibogaine for placebo-controlled clinical trials, which demonstrated attenuation of opioid withdrawal in rats. Later studies showed that ibogaine was also apparently effective in reducing cocaine and alcohol dependence in rats, while a phase I human trial also showed that 25 out of 33 heroin addicts treated with the drug “showed improvements in their symptoms of opioid withdrawal.”

Risks and complications of use

Ibogaine’s growing reputation as a potential treatment for serious addiction, coupled with its continued illegality, has led to the emergence of a dangerous market in underground therapy. According to an article in Village Voice, at least 19 people died between 1991 and 2013 while undergoing such treatments – “almost always when combining the hallucinogen with other drugs.” But, even for those that survive, taking ibogaine in an unauthorised setting can be extremely unpleasant. Bwiti practitioners describe the ‘trip’ as like “breaking open the head”, while other dangerous side effects include intense nausea and heart arrhythmia.

Modern-day ibogaine researchers are, however, confident that such side-effects can be safely managed in controlled laboratory settings, with proper medical support. According to Dr Srinivas Rao, chief scientific officer at drug developers atai Life Sciences, careful dosing and further trials should in particular lessen the cardiovascular dangers that, traditionally, have been associated with ibogaine use. Rao also argues that – with America in the grip of an opioid crisis – finding an effective addiction treatment would probably justify some level of cardiovascular risk.

Ibogaine is obtained by extraction from the iboga plant, or by semi-synthesis from voacangine, another plant alkaloid. It is highly lipophilic and subject to extensive biotransformation, primarily by the cytochrome P450 (CYP450) 2D6 enzyme. It disappears fairly rapidly from the bloodstream, with a half-life of 7.5 hours. Ibogaine and its analogues act on several neurotransmitter systems in the brain that may contribute to the ability to suppress autonomic changes, objective signs, and subjective distress associated with opiate withdrawal. It binds to numerous sites in the central nervous system, including serotonin, dopamine, and sigma receptors, kappa- and mu-opioid receptors, and the n-methyl-d-aspartate ion channel.

Interest in studying ibogaine suffered something of a lull after 1995, when the US National Institutes of Health cancelled its research programme into it. But new companies have recently sprung up in the hope of developing commercially viable ibogaine treatments, as well as designing new analogues that could cure addiction without the ‘trip’ associated with the drug.

The atai subsidiary DemeRx is currently conducting phase I/IIa clinical trials in the UK to assess the safety, tolerability, pharmacokinetics and efficacy of ibogaine, with initial data expected this year. However, atai is also studying the potential of noribogaine, ibogaine’s principal psychoactive metabolite, because it does not produce hallucinogenic effects and therefore may be suitable as ‘maintenance therapy’ that could be taken in an office or home setting.

Meanwhile, David Olson, a chemistry and neuroscience professor at the University of California, is looking to develop non-psychoactive analogues of compounds like ibogaine as treatments for substance abuse, depression and dementia. His modified ibogaine molecule, Delix-7, has attracted the interest of the US National Institute of Drug Abuse, as well as considerable funding from commercial investors. Designed to stimulate neuroplasticity in the brain via the 5-HT-2A receptor, Olson’s so-called ‘psychoplastogens’ are currently scheduled for clinical trials at the end of 2022.

After four decades of being regarded as dangerous or subversive, psychoactive compounds including MDMA, LSD and psilocybin are now firmly in the mainstream of pharmaceutical research, with 17 clinical trials of psychedelic drugs listed as ongoing in 2020. Ibogaine, with its long-held reputation as a powerful therapeutic, now also seems ready for its own ‘moment’, and could yet provide the basis of tomorrow’s treatments for addiction and mental disorders.